Located in the forest near Dubrava, 8 km north of Šibenik, it is a unique place where visitors can learn about the mysterious life of celestial hunters – falcons and owls. 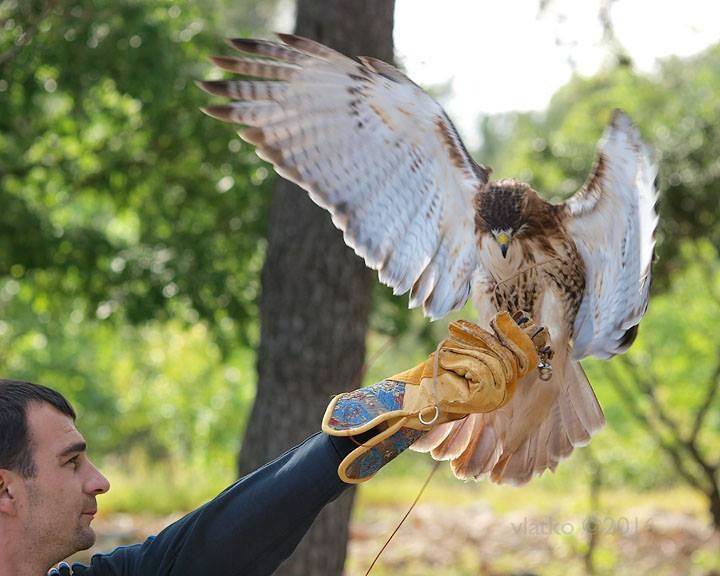 About The Falconry Center Association

The Falconry Center Association was founded in 2000 to protect birds of prey and educate the local public on wildlife conservation issues. As a rehabilitation center for injured birds, kept here before returning to the wild, the Center has become an important tourist attraction.

The Falconry Center Association is an authorized institution of the Ministry of Environmental and Nature Protection for the care and preservation of protected animal species. The Veterinary Service operating within is the only registered veterinary service for birds of prey in Croatia. The growth of the Center was successful with the help of domestic and foreign donors and sympathizers and required a lot of perseverance, thinking, and time. 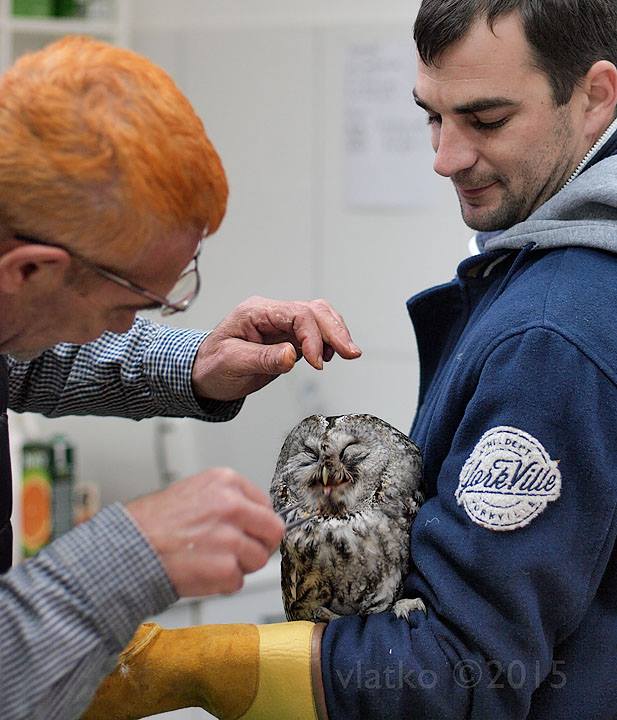 The Falconry Center is led by an expert team composed of falconers, veterinarians, forensic chemists, and other associates. They are working together on various projects, for which the Centre is internationally recognized: creating a database on bird DNA, a collection of feathers, toxicology, and forensics of birds. Numerous domestic and foreign journalists have so far reported on the work of the Falconry Center, the way of life of birds of prey, and important messages about the need to protect these celestial predators.

The Falconry Center receives birds of prey from all over Croatia. A special place is occupied by a hospital where birds that need help to survive in nature are treated and recovered. The treatments performed in the clinic are often just as complicated as those performed on humans. 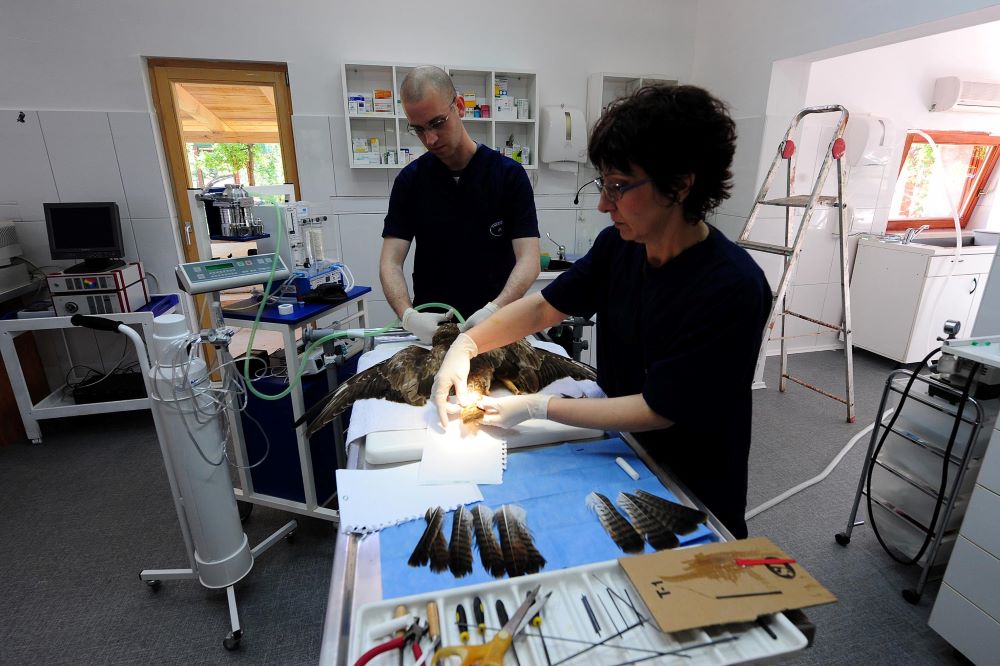 After treatment and rehabilitation of wounded, sick or simply starving birds, they are released into the wild as soon as possible. The release usually takes place in the same place where they were found, so as not to lose hunting territory.

Every bird that has stayed in the center must be ringed. 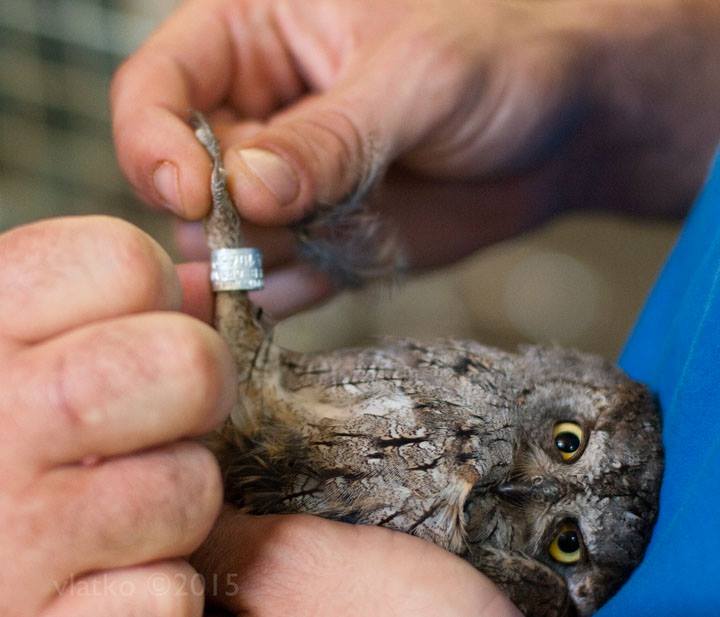 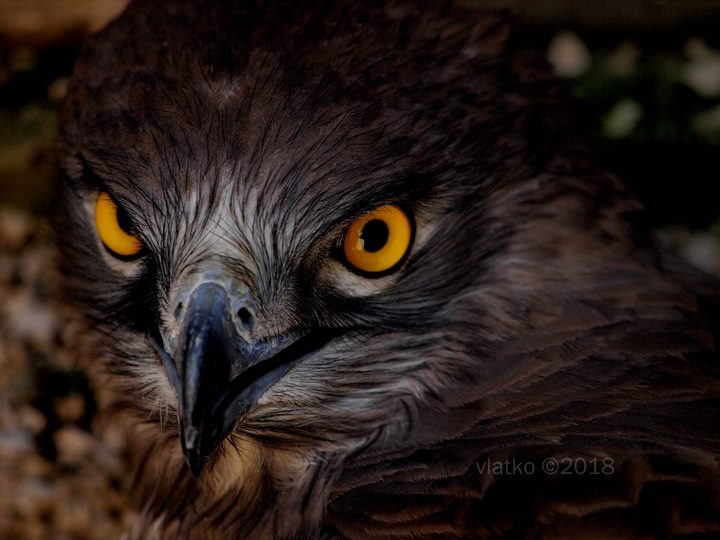 Some of the main reasons why birds end up in a recovery center are interacting with humans, close encounters with electric fences, cars, or because they were inappropriately kept as pets. Some are orphaned by hunters. If they get used to humans, they have small chances of surviving alone in the wild. Such birds are kept away from the eyes of visitors. The majority are successfully treated and returned to the wild. 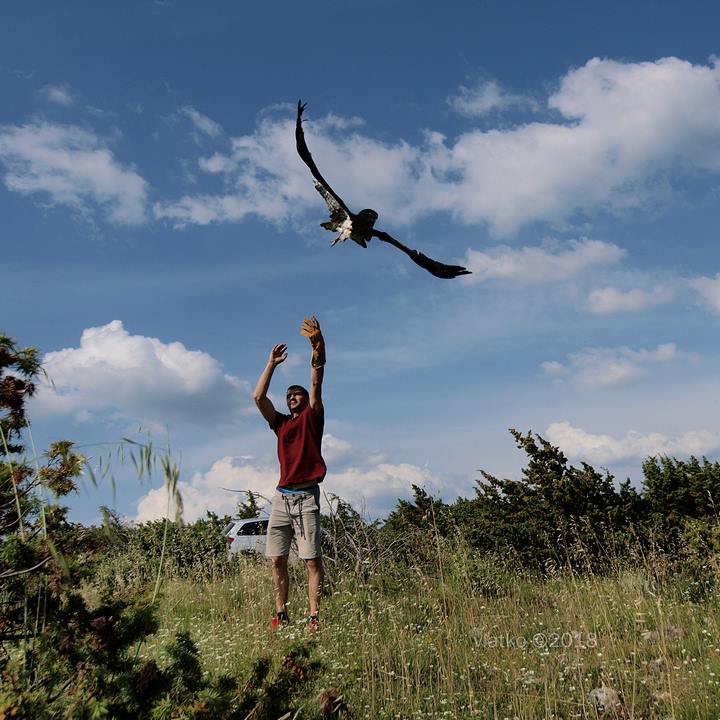 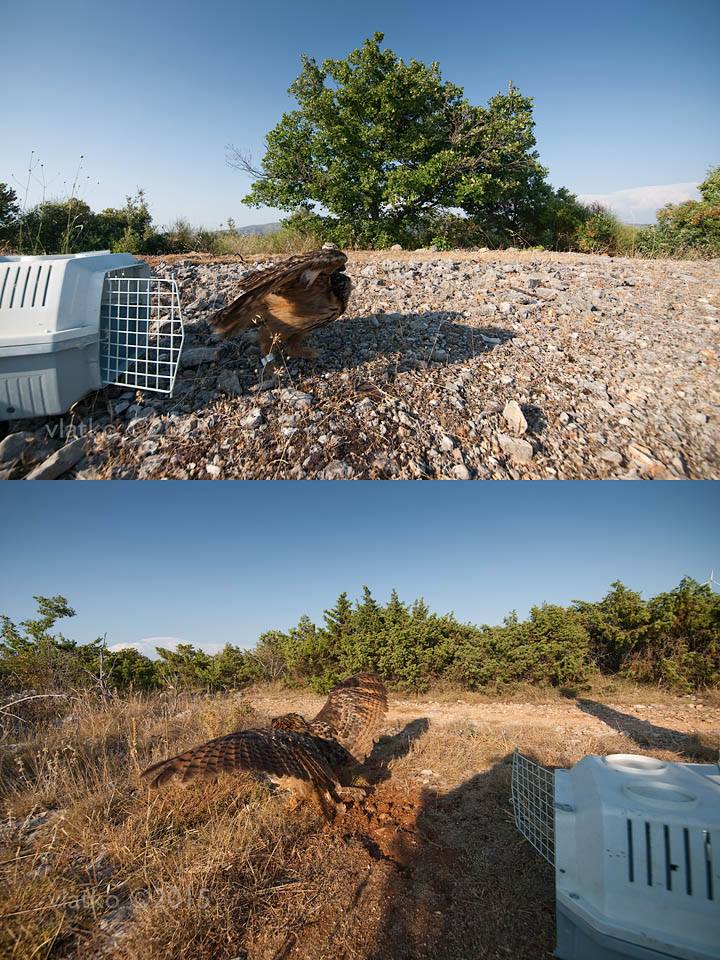 Release of 2 adult eagle owls, after rehabilitation at the Center. Footage of the first flight back to freedom, author: Sokolarski centar Dubrava, source:Facebook

The perfect place for daily trip

If you plan a family day trip, this is the perfect place to spend your time. You will not only learn something new, but you have a unique chance to get in contact with birds of prey. It is important to note that the Falconry Center is not a ZOO, and visitors are not allowed to interact with birds that are temporarily in the Center until they are cured and released into the wild. The only interaction is possible with falcons and owls who are permanent residents of the Center and who, for some reason, can no longer be released into the wild. 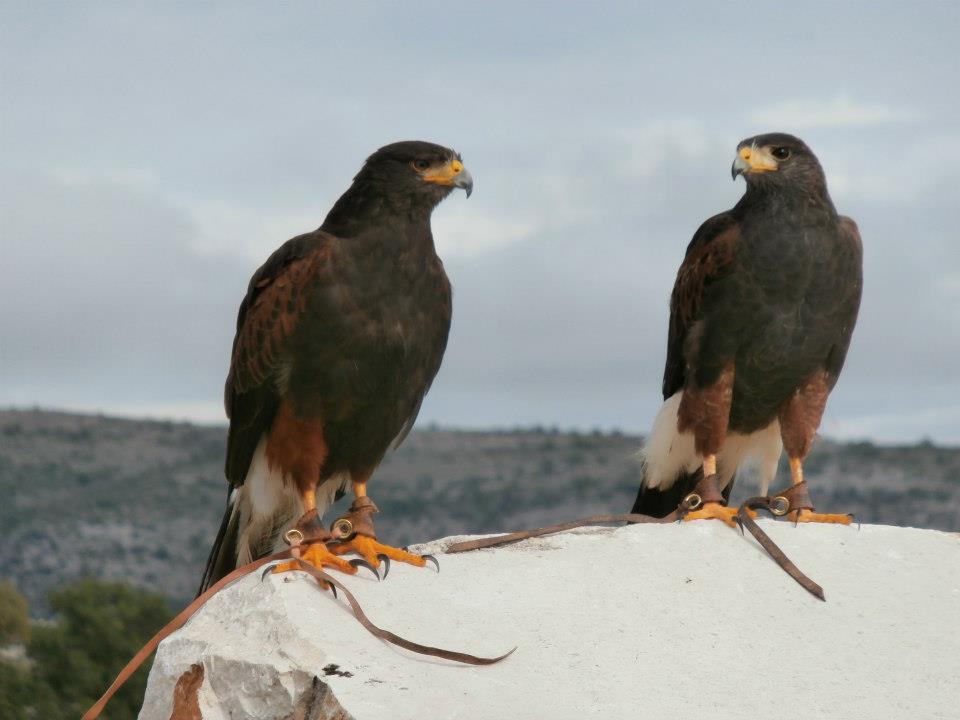 Individual visitors can admire and photograph all the birds currently kept in the cages of the Center (the most numerous are buzzards and eagles), which is an extraordinary experience that will confront you with creatures you would otherwise never see so close. 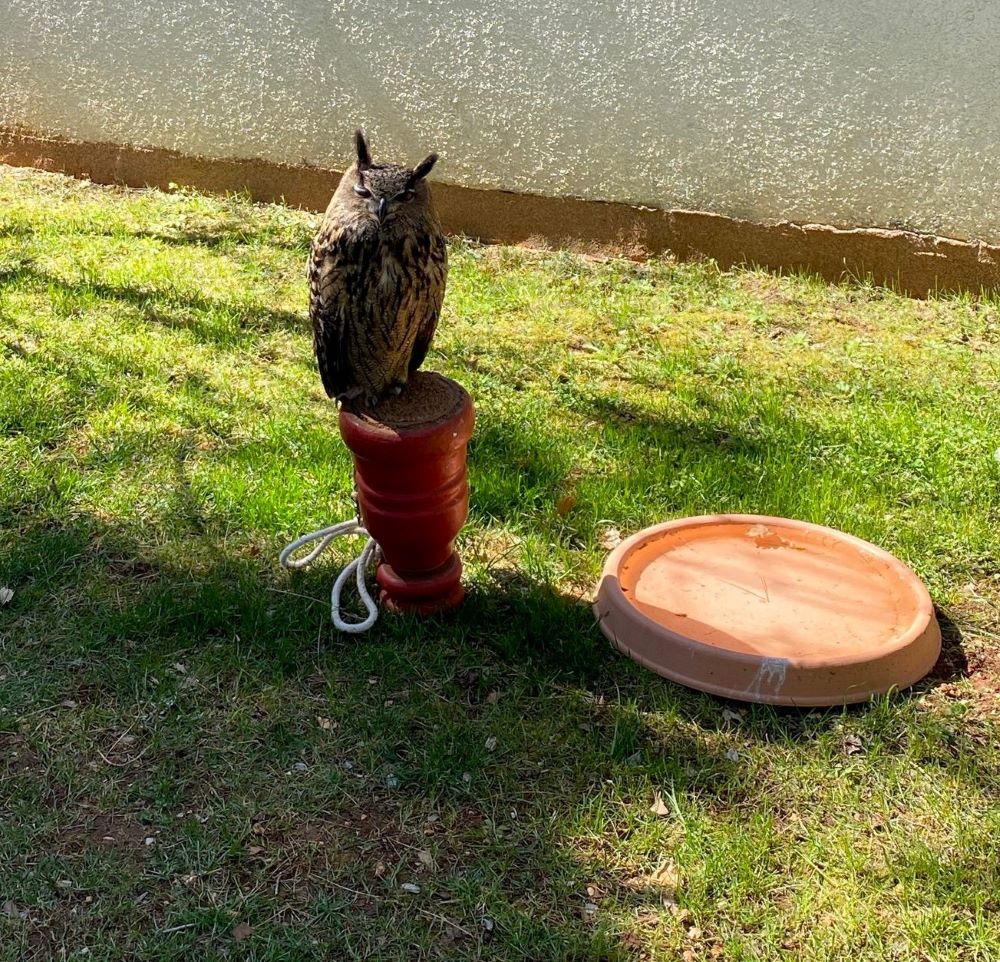 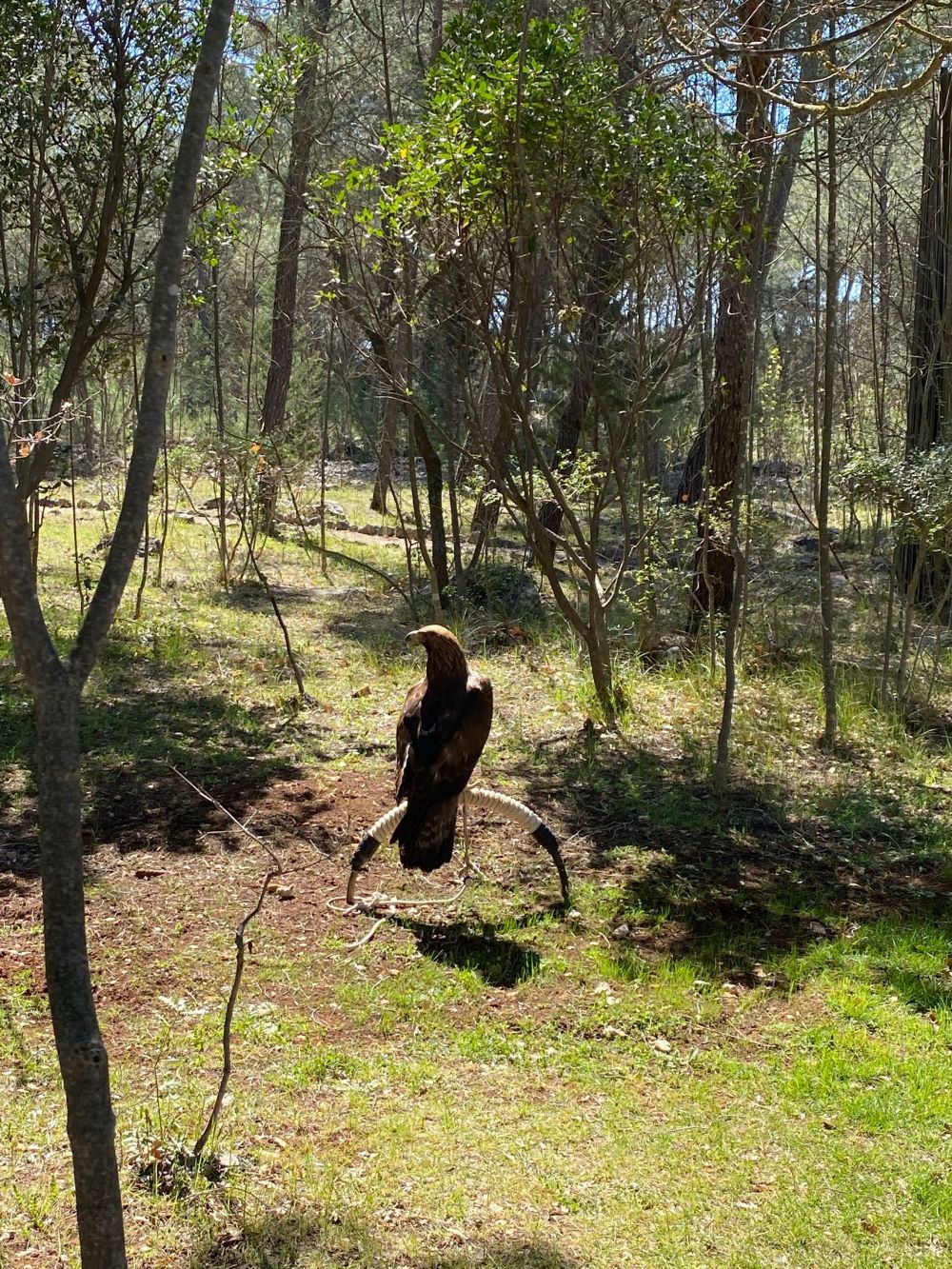 Do not be surprised by the sight of owls and falcons sitting on wooden stumps, tied to their feet. It's not that they don't fly, but to keep them away from each other. The area is small for so many predators in one place, so they are tied up for their safety.

Each of them is provided with an hour of flight a day. 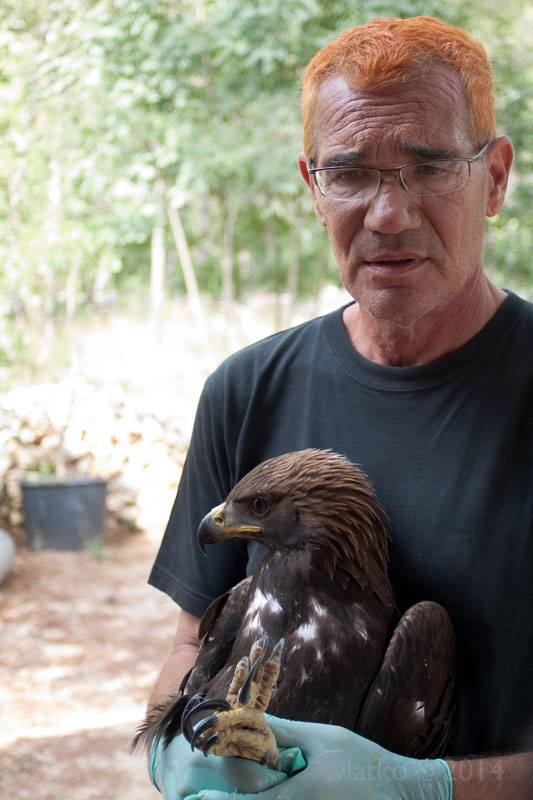 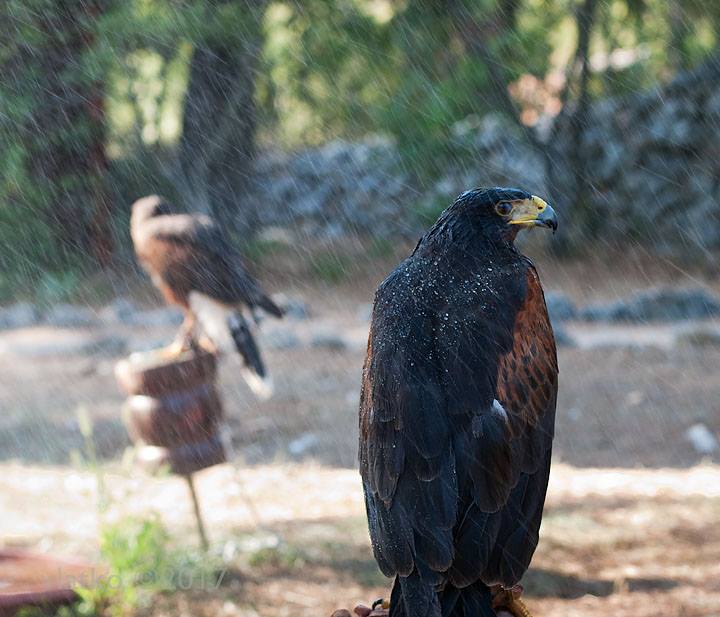 This spring, we stopped by at the Falconry center, on the way to the Krka waterfalls with the kids. The visit became something we talked about for days. It was so fascinating we can not wait for another visit! You can also take part in a falconry course and try this almost forgotten medieval discipline. To stand face to face with these amazing celestial hunters and learn something new about different species of birds of prey is a special experience. 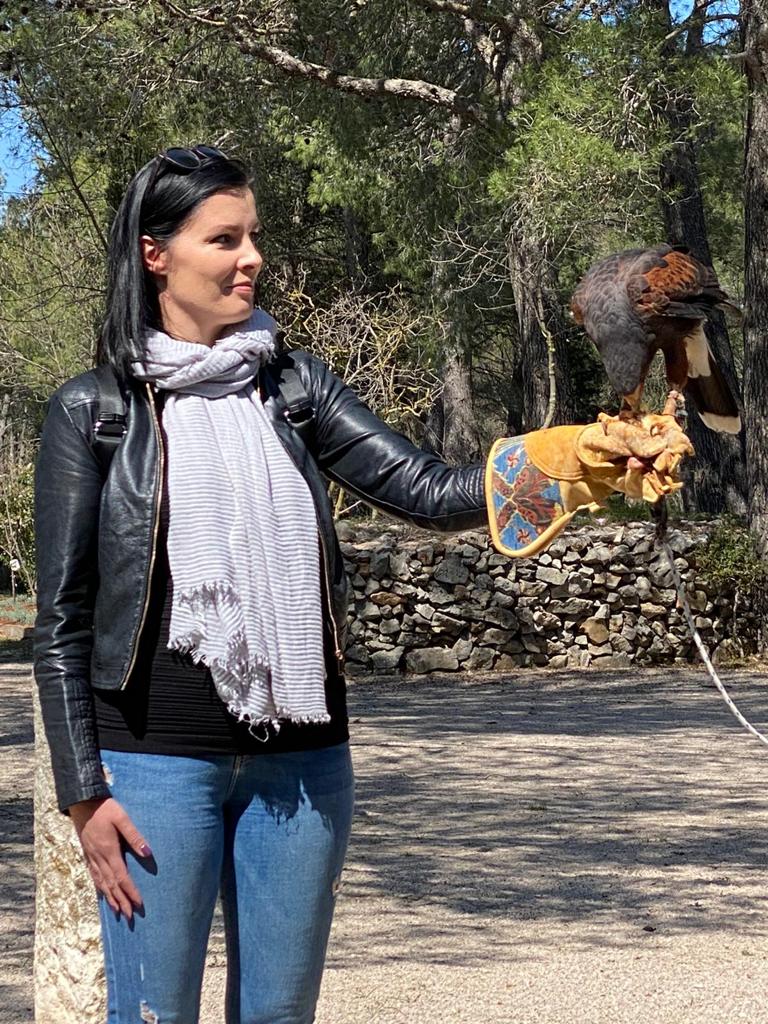 Lunch time, but only for the falcon

It is hard to pretend you are not scared standing with the prey in your hand, while the falcon is approaching it in a quiet flight at lightning speed. Still, since you are in the good hands of staff, you will quickly relax. 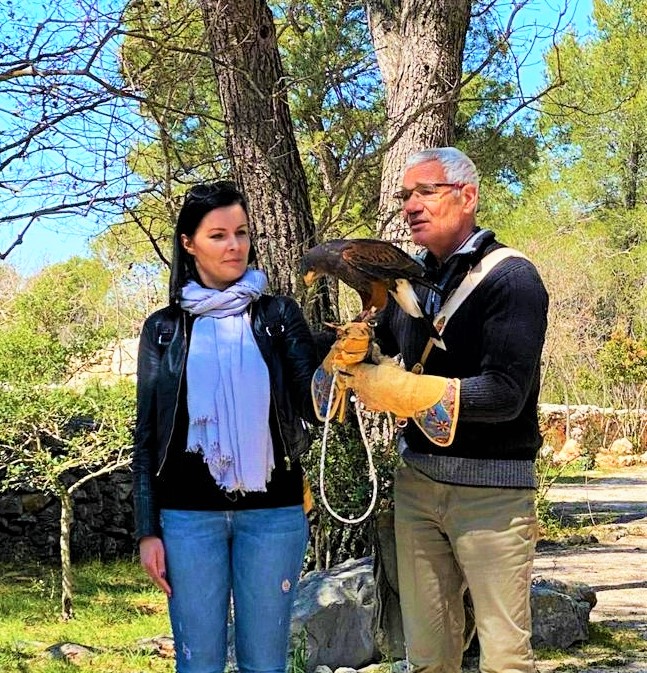 Did you know that there are about 40 species of falcons worldwide?

They are widely distributed on all continents of the world except Antarctica.

Falcons are strong, fast fliers with great aerial agility, which makes them successful hunters capable of taking prey 6 times their own body weight! 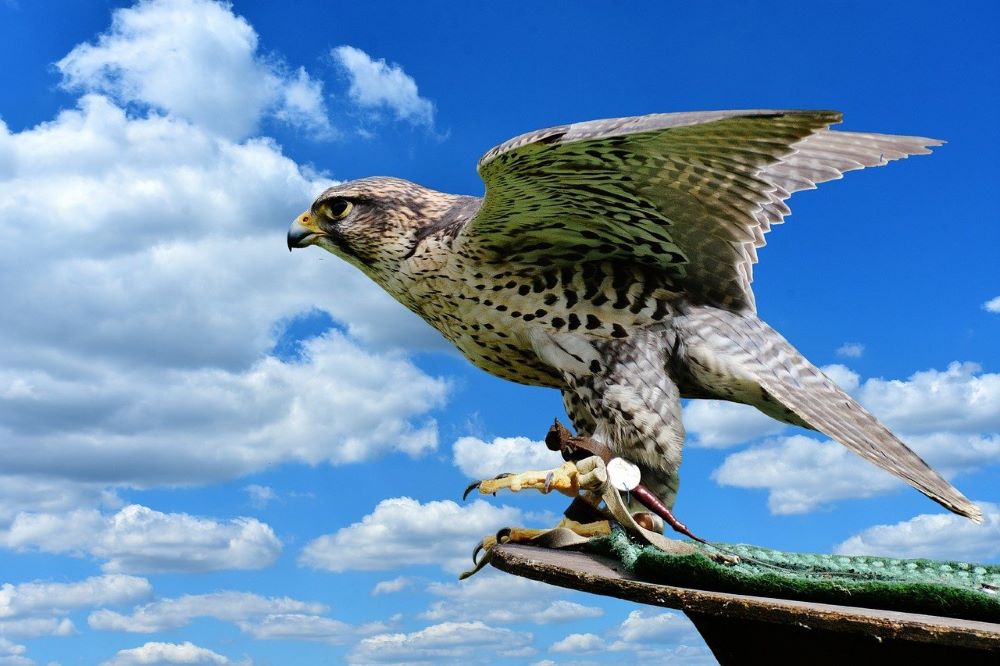 Ready to take off, source: Pixabay

According to a National Geographic TV programme, the highest measured speed of a peregrine falcon is 389 km/h (242 mph), making them the fastest recorded animal ever. 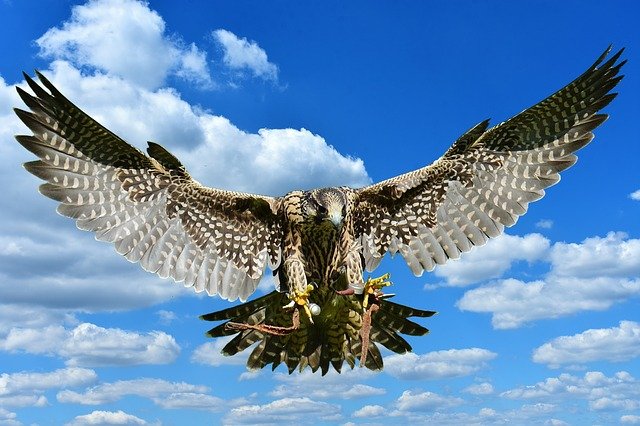 Rulers of the sky, source: Pixabay

The passionate and attentive host, Emilio, will explain to you in detail a lot about all the species that live in the Falconry Centre. Some birds can never return to the wild, so they are used for explanations and education. 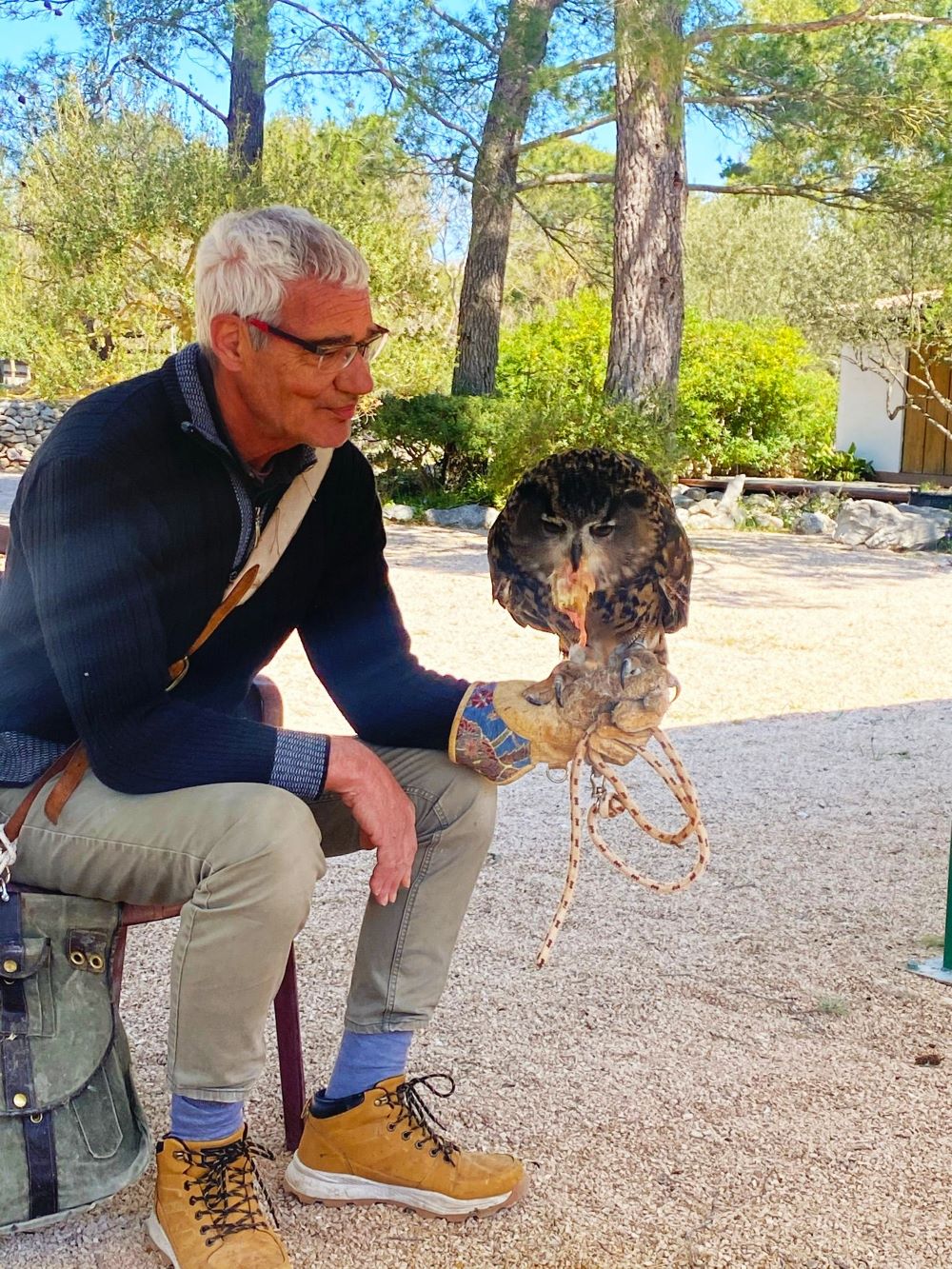 Emilio with Mordecai, feeding time during the educational lesson

Small educational lessons are organized every hour. These 45 - 60 minutes will fly by very quickly as Emilio will reveal fascinating facts about owls and falcons.

Owls do not have ears like humans. They only have holes in the skull, one larger and one smaller, and set at different heights. That is why owls can hear a mouse under a thick layer of snow. Their eyes act like a photographic zoom, and they can track their prey from a distance. 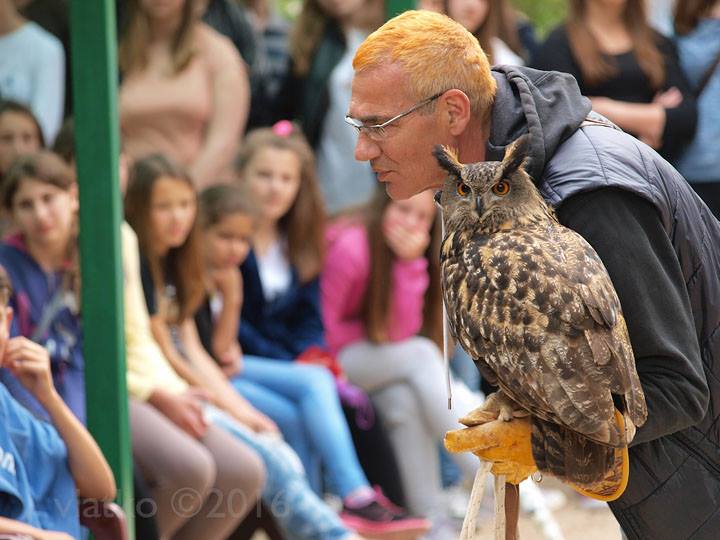 When hungry, owls emerge from their nests and simply choose what they want to eat that day. Usually owls fall on rabbits and foxes, but they eat only a small part of them, about 0.5 kg, the rest is left for bait, around which the animals gather and become its next prey. So it can be said that the owl wisely sets the trap.The center is really a special place to get so close to birds of prey. 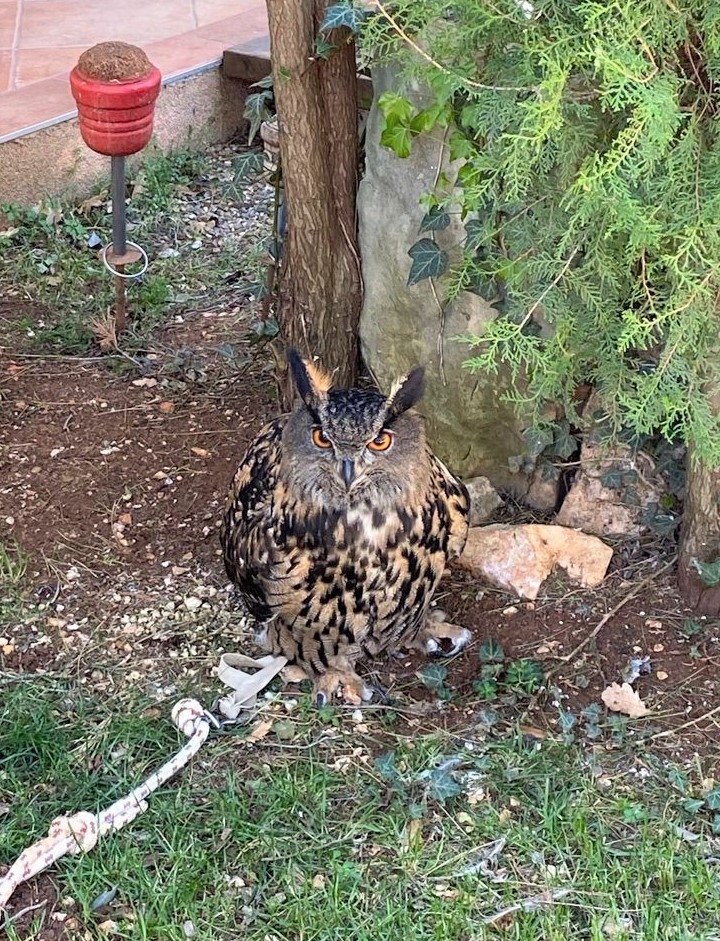 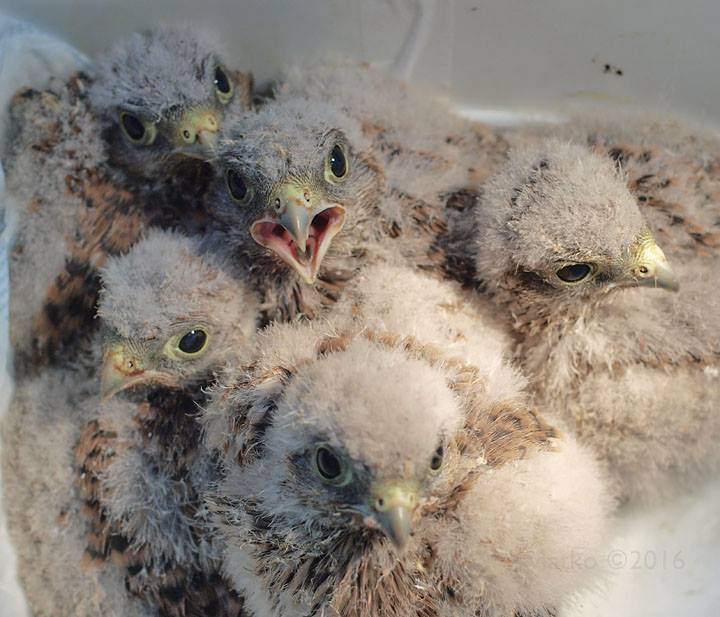 Five baby kestrels at the Center. There is at least of them hungry at any given moment. author: Sokolarski centar Dubrava, source:Facebook 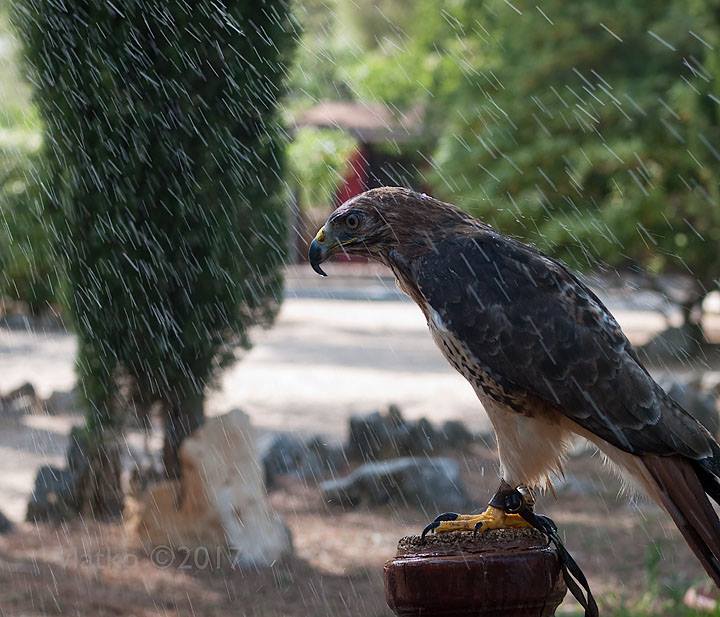 You can also take a picture with Mordecai, a huge Eagle Owl, one of the inhabitants who unfortunately can no longer survive alone in the wild. But with the love and care of the staff there, she has the best life possible. 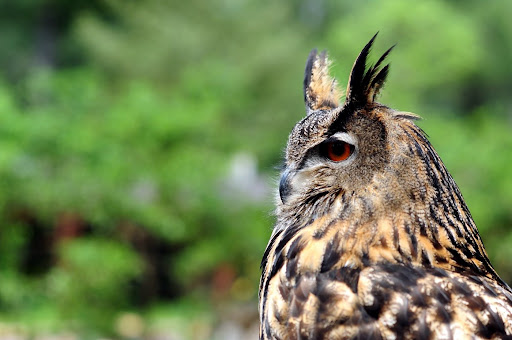 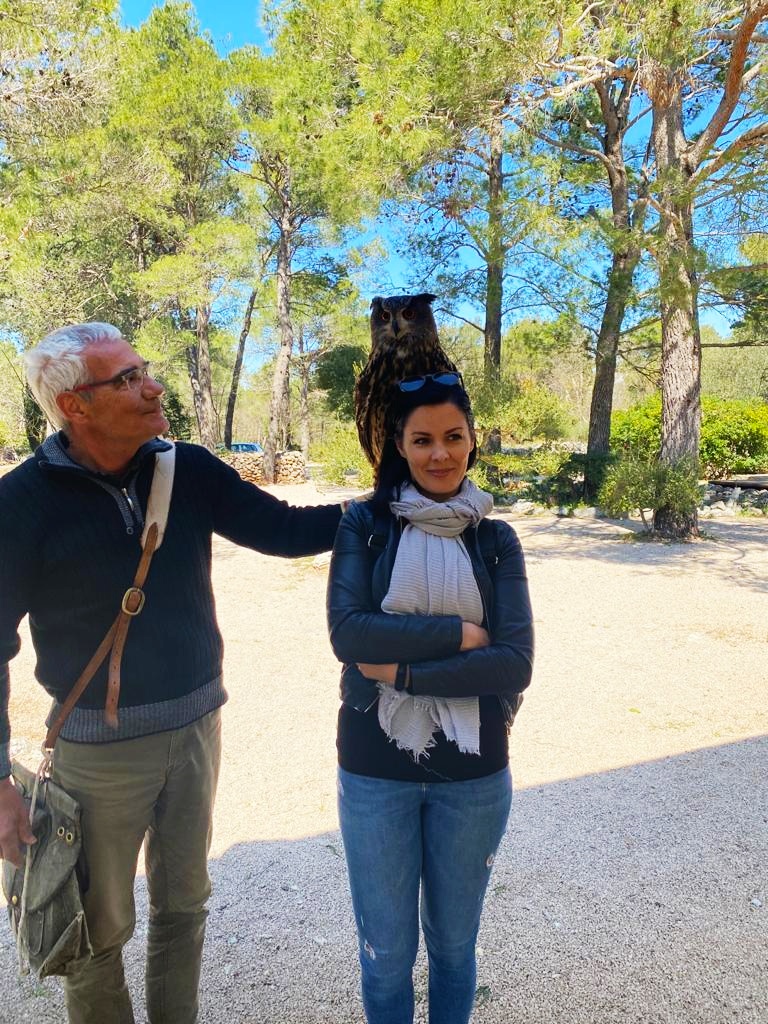 Photo with Mordecai is a must

The children fearlessly volunteered to feed the falcons as well and are happy to remember that experience, which we will surely repeat again. 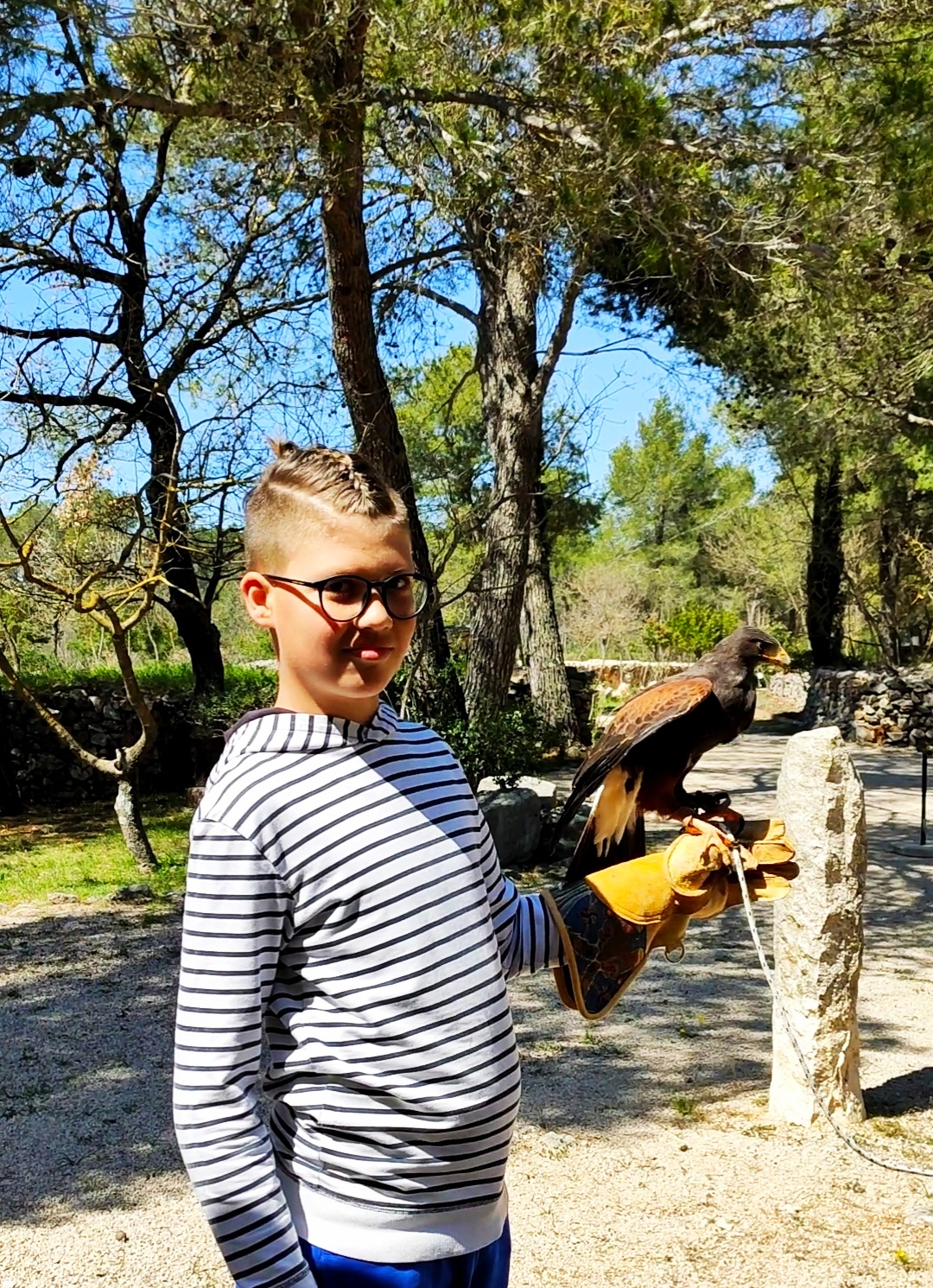 New friendships were made

It is fascinating that in the 20 years that the Center has been open to visitors, almost 65,000 children from almost all schools in Croatia have attended educational-tourist programs. 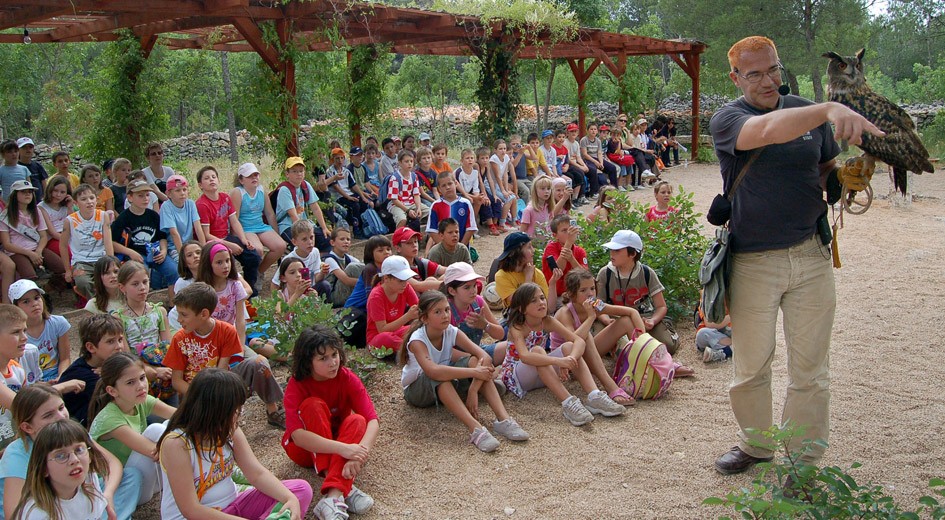 We hope that the Falconry Centre will be able to expand the views of as many people as possible and bring everyone closer to the importance of these wonderful celestial rulers. 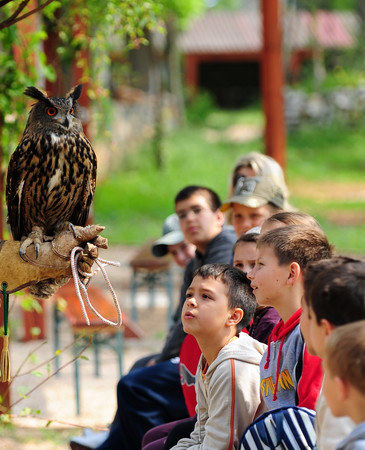 All earnings from ticket sales are used for operations and running the center. By paying for a ticket, you will allow injured birds of prey to return to health and then return to the wild when they recover. In the center there is a small terrace where you can enjoy coffee in the peace and quiet of the forest. You can also buy a souvenir, a small feather necklace that will support the work of the center and the commitment of these amazing people. 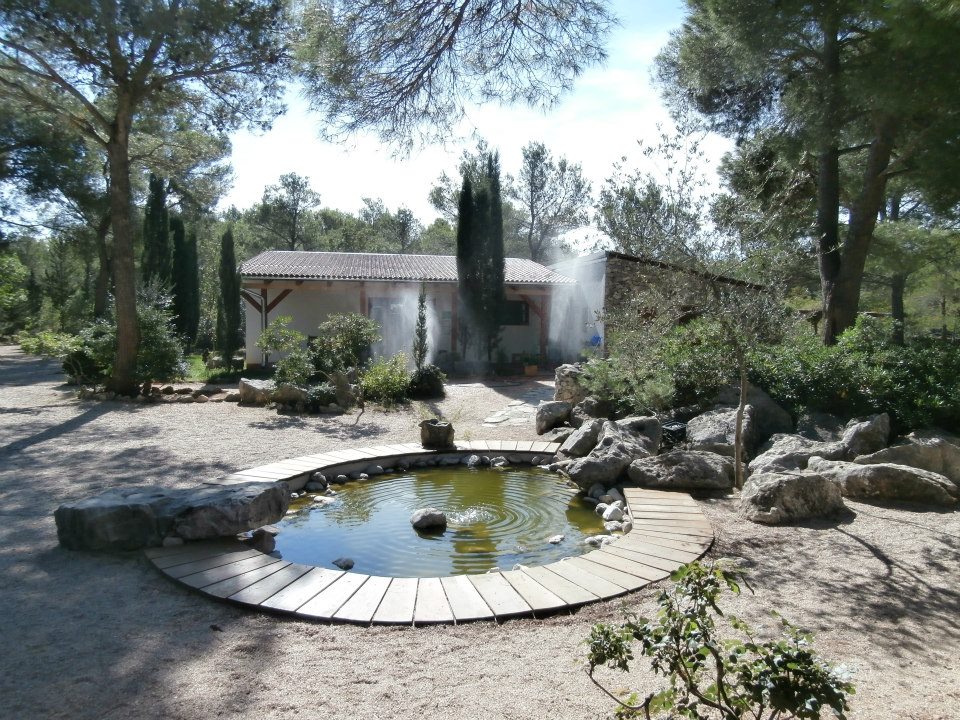 What to do if you find an injured bird of prey

We are sure that this fascinating place and experience will be unforgottable for the whole family!