While in Hvar our travel bloggers did plenty of sightseeing. Here are some of the sights they visited.

Pjaca is actually the largest town square in Dalmatia. 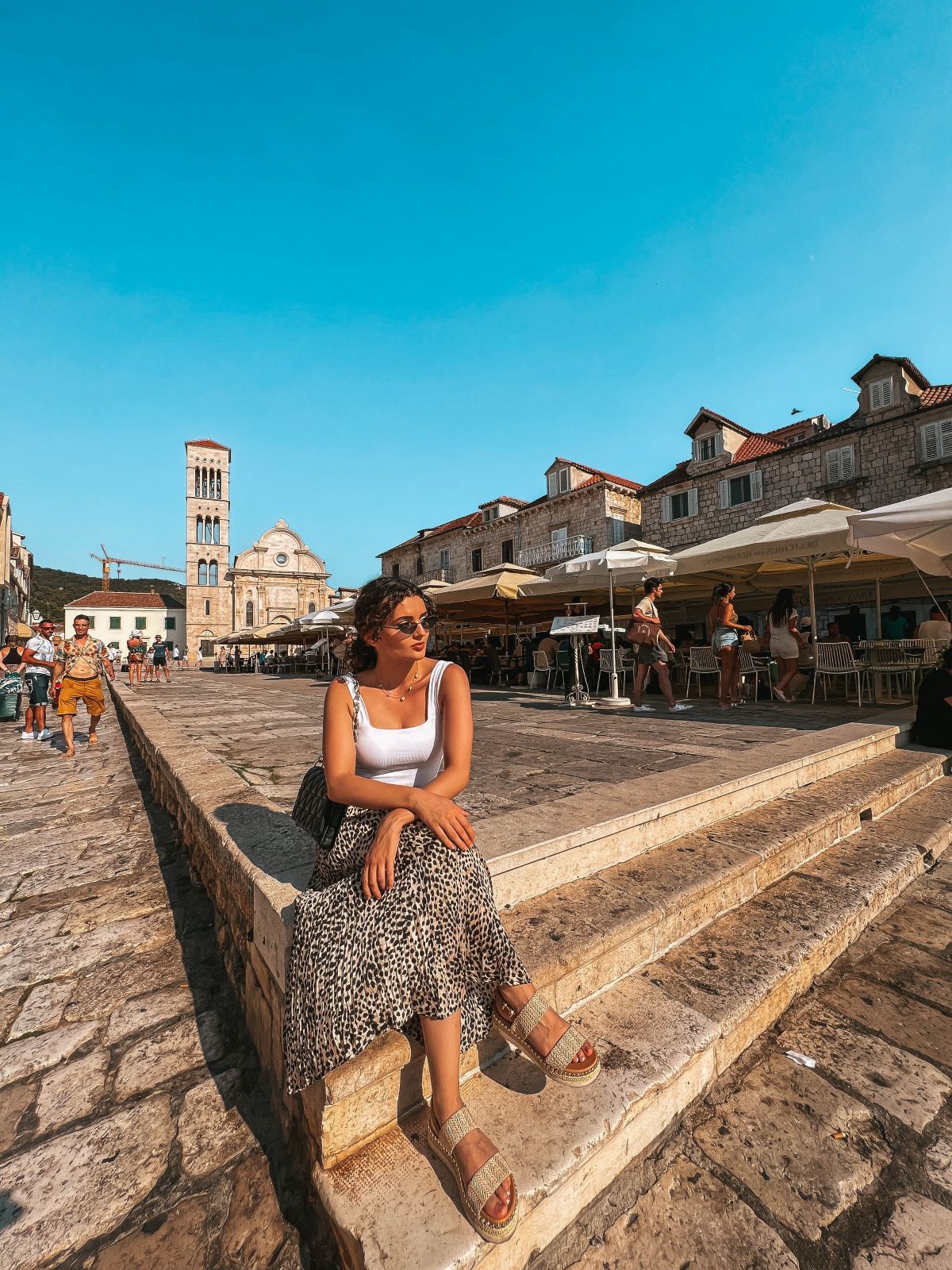 Hvar Pjaca with St. Stephen Cathedral in the background

On one side of it lies the Cathedral of St. Stephen. 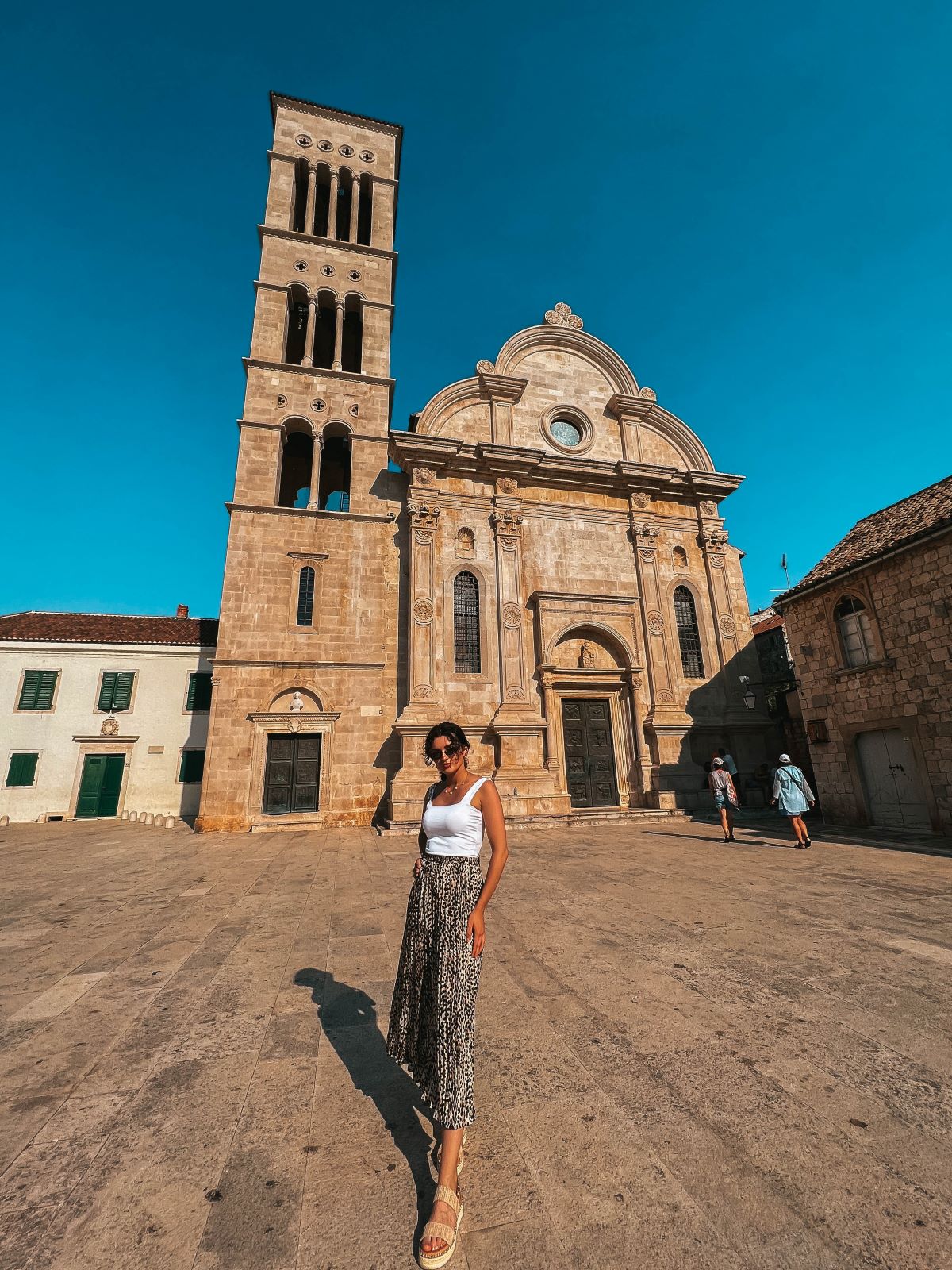 And on the other side is the beginning of Riva. Riva seafront is perfect for walking or just sitting and gazing at the turquoise sea. 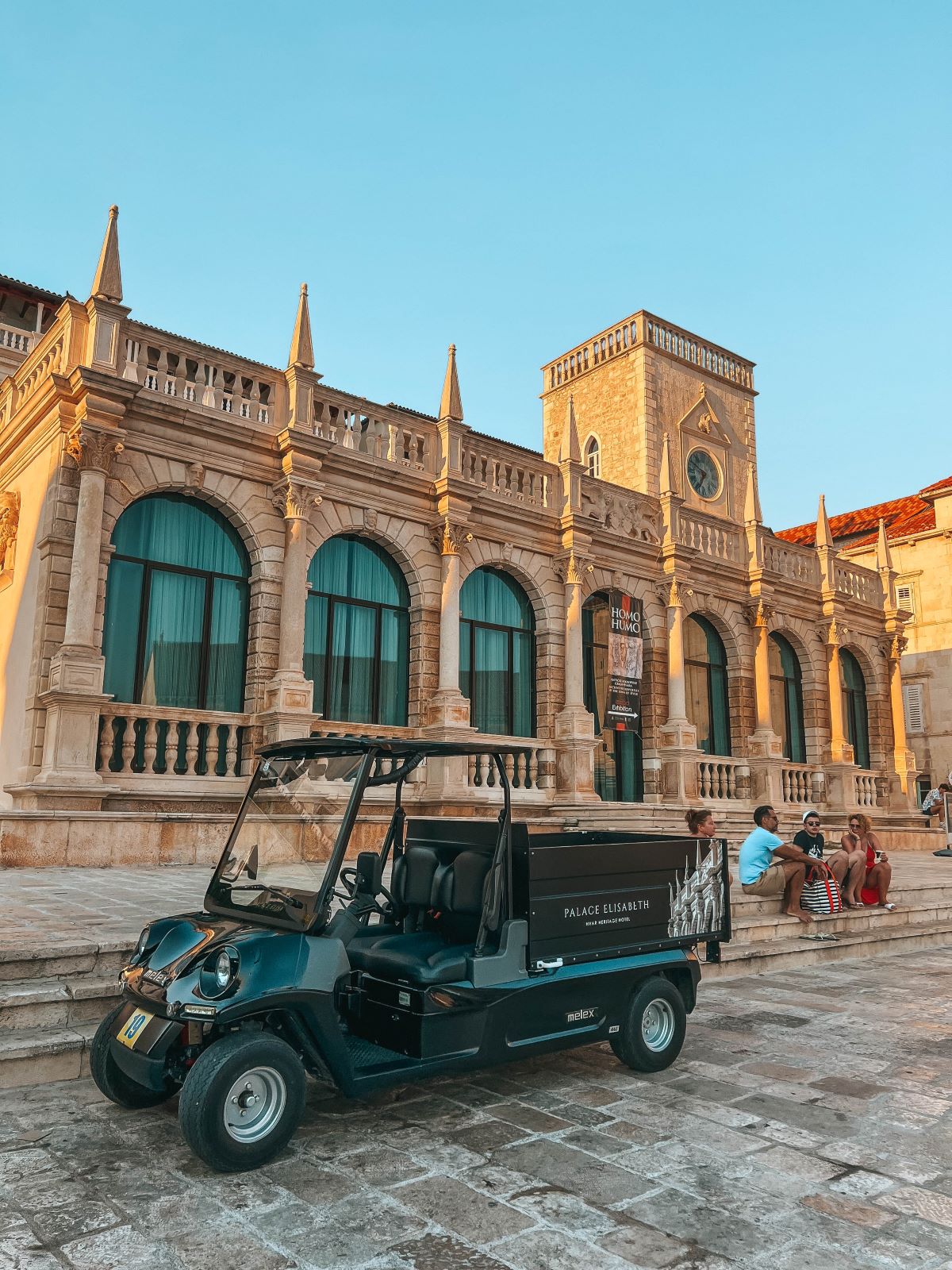 City Lodge is also situated at the Pjaca, but on the other side from the St. Stephen Cathedral. You can admire its renaissance facade and the clock tower. At the beginning of the 20th century, it became a fancy hotel. 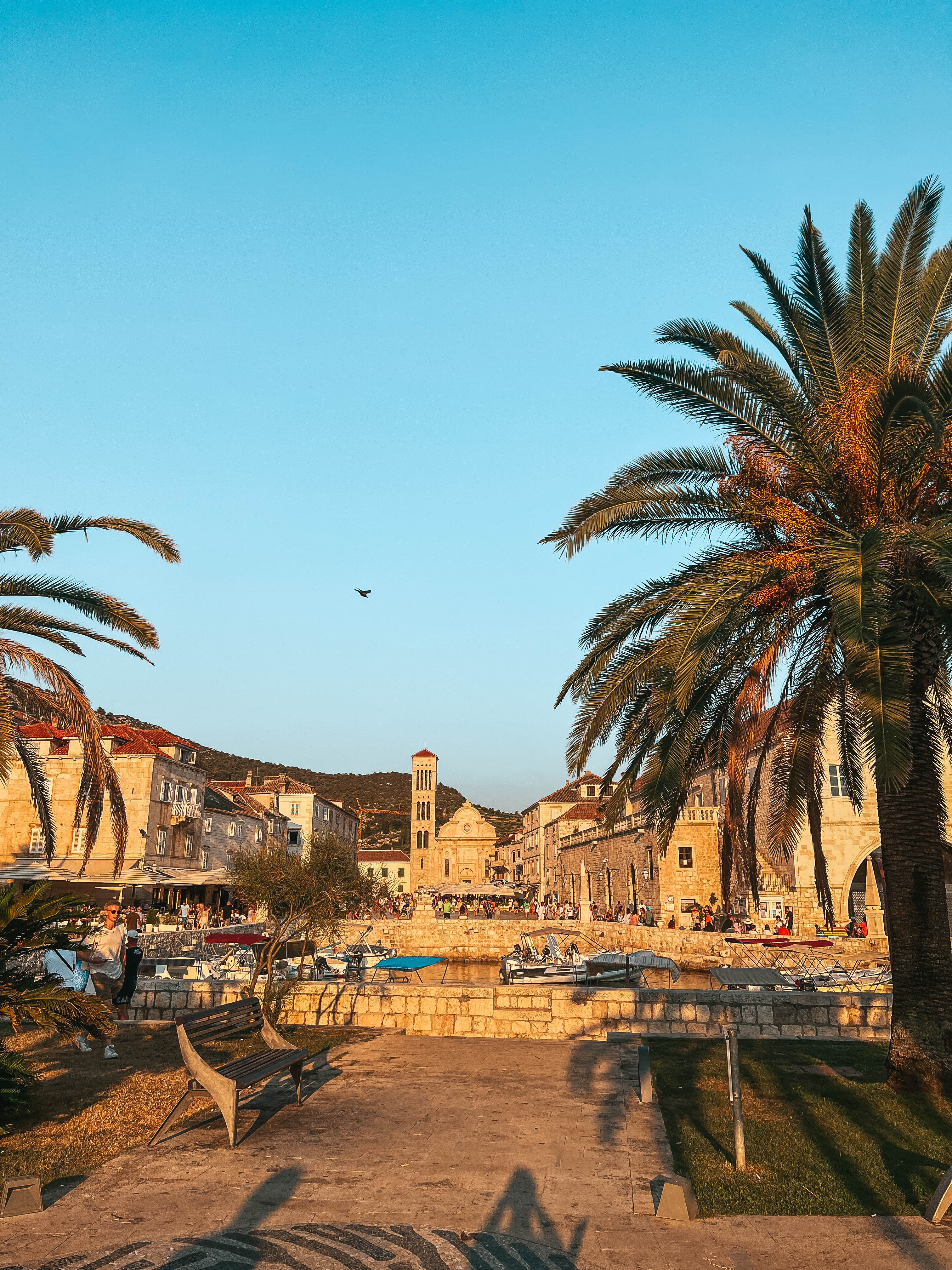 Situated at the right side of the Pjaca looking from the sea and towards St. Stephen's Cathedral lies Arsenal. The first public theatre in Europe was opened in this building.

Actually, the Franciscan monastery lies near the villa where our travel bloggers stayed. Beach is also near the villa. You can reach it if you walk from Pjaca square over the Riva promenade and you come to it. 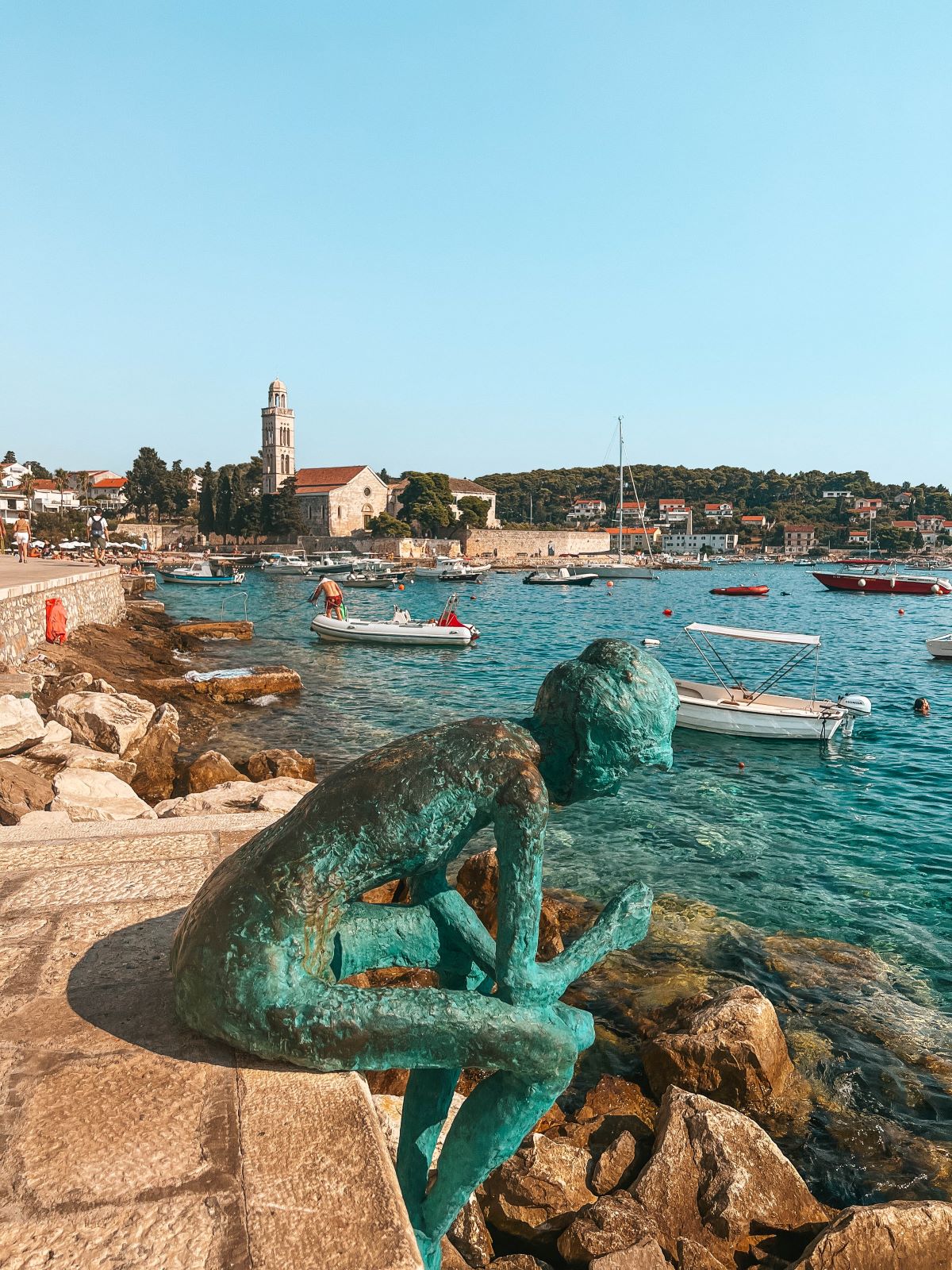 Statue of Sitting Fisherman near the Franciscan Monastery

The statue is situated on the other side of the Riva from the Monastery. Ivan Vucetic discovered dactyloscopy science about fingerprints and how to solve crimes from them.

The Museum is situated downtown and you can see the display of Hvar lace which is World famous and made from agave plants.

Park is situated on the way to Fortica Fortress. The entrance is free and you can admire the town view. 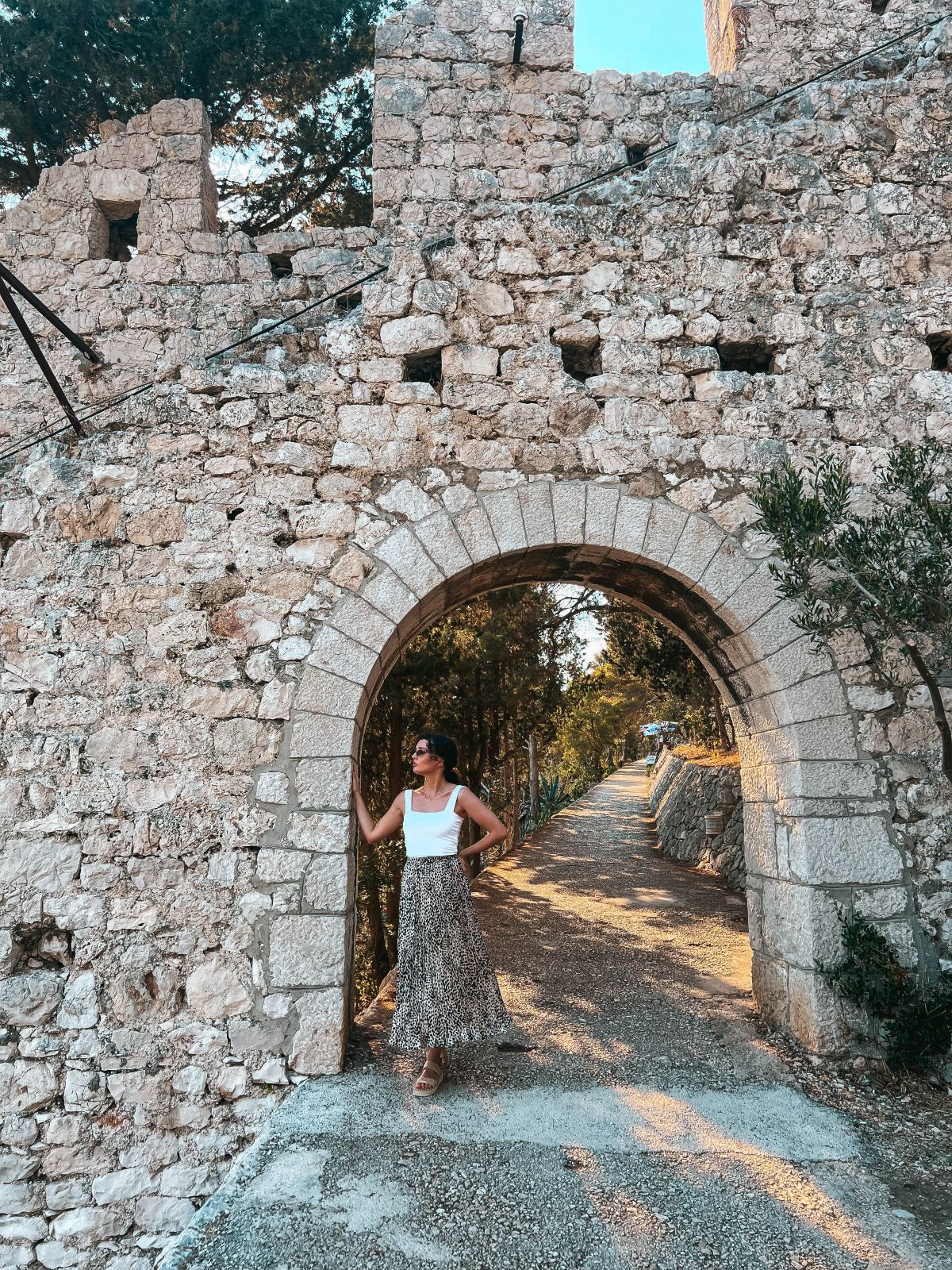 Park on the way to Fortica

This is the major sight in Hvar and our travel bloggers visited it as well. The fortress is situated high up on the hill and it offers the best view of Hvar. Check the photo below and you will see it! 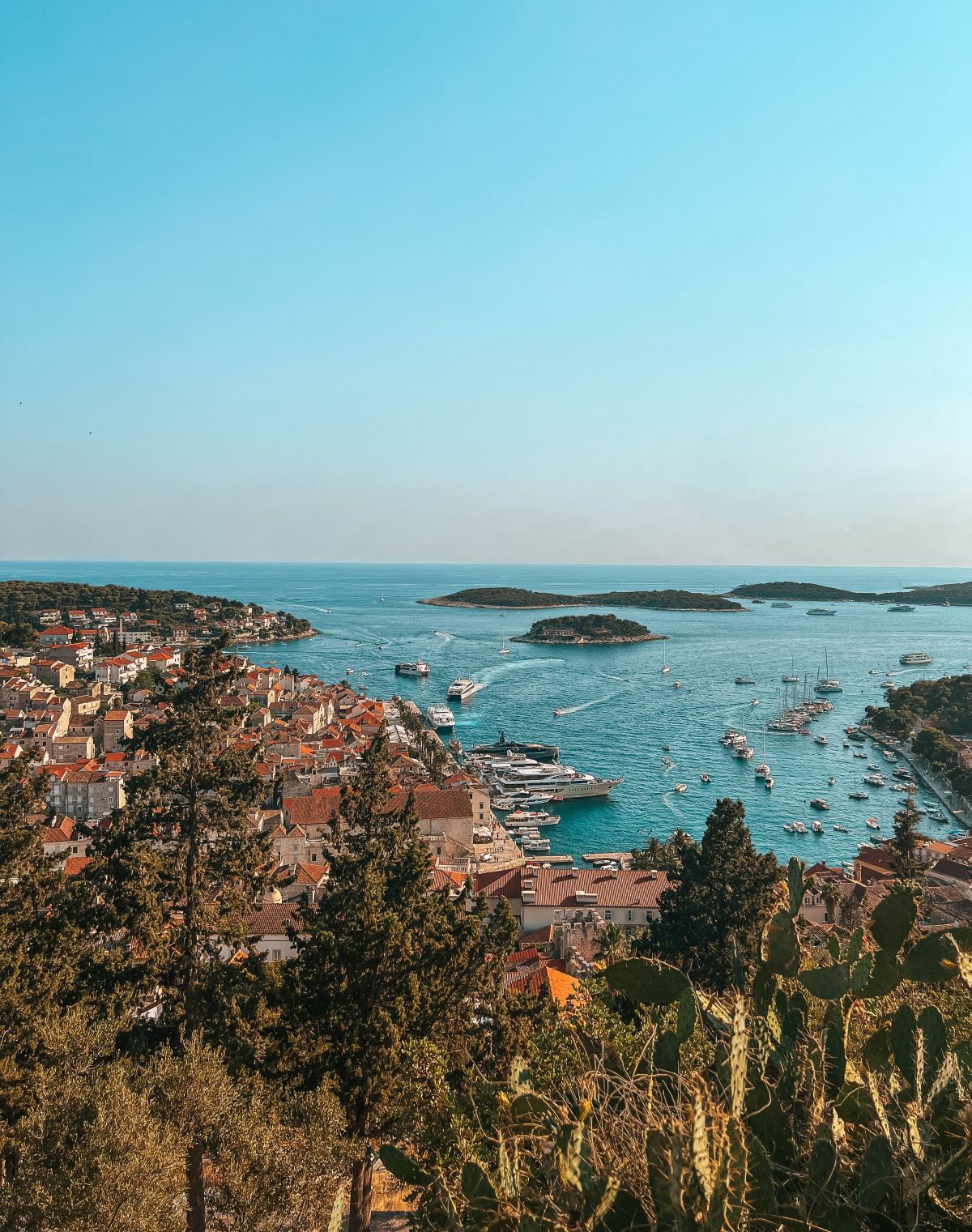 Hvar has a lot of choices for fine dining. We have already written about some of them. Check out our previous blog Restaurants on Hvar island if you are interested in finding most of them.

The food presents a fusion of modernly decorated sushi with Dalmatian cuisine.

The design of the restaurant is also a mix of authentic stone walls with modern amenities.

Another benefit is the terrace with outdoor seatings. Combined with the downtown location and friendly staff, this restaurant is really the best choice for Hvar dining.

As you have already seen Hvar is full of historic monuments, churches, statues, and monasteries, but also vivid nightlife. 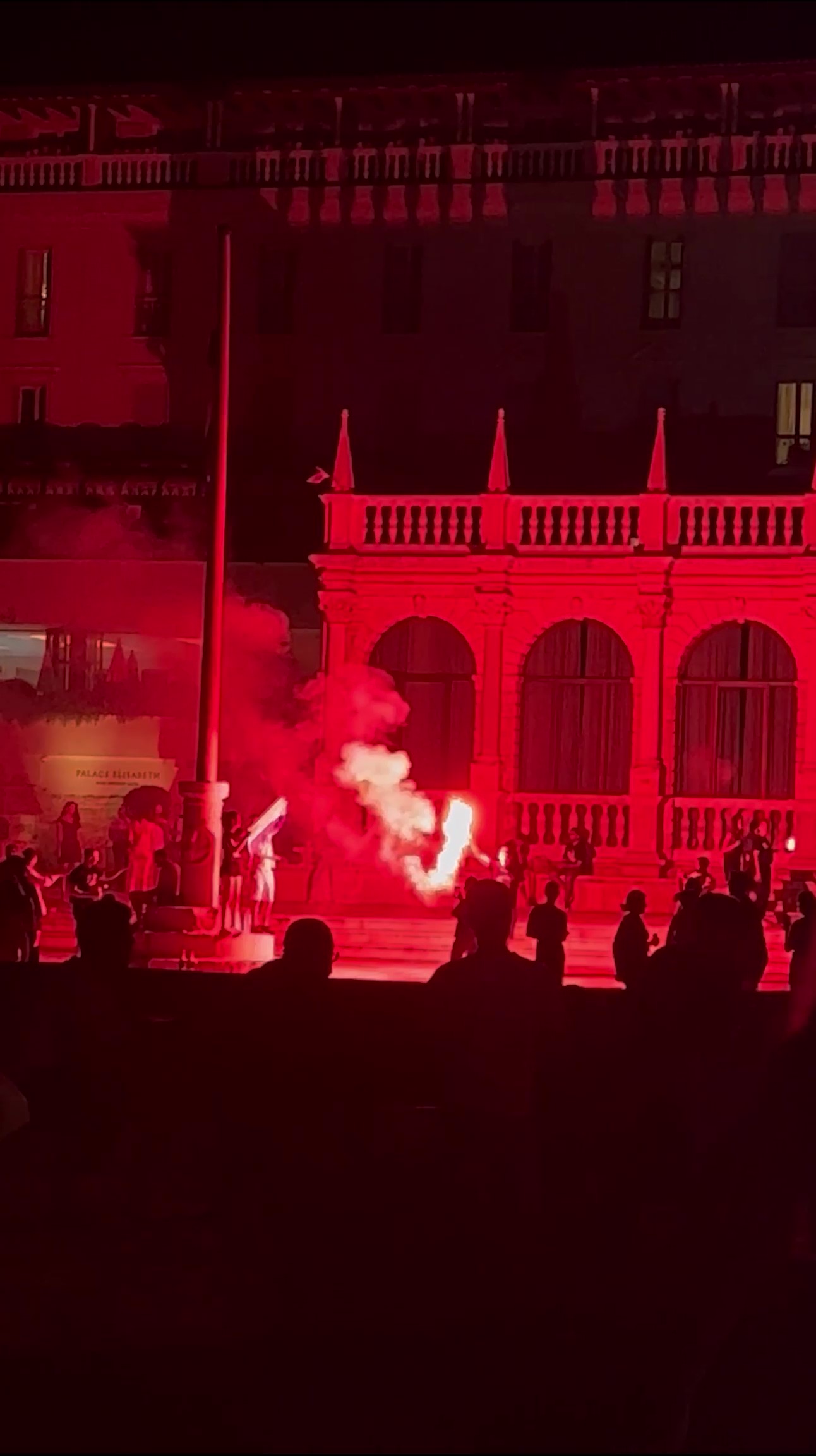 We have already written about Hvar nightclubs. Feel free to check the following blog if you are interested in more information: The Top FAQs about Hvar – Local Travel Guide.

Where to stay on Hvar island?

As we already mentioned villa is situated downtown and near the Franciscan Monastery. One of its greatest advantages is the view of Hvar, sea, and greenery. Even from the Jacuzzi. 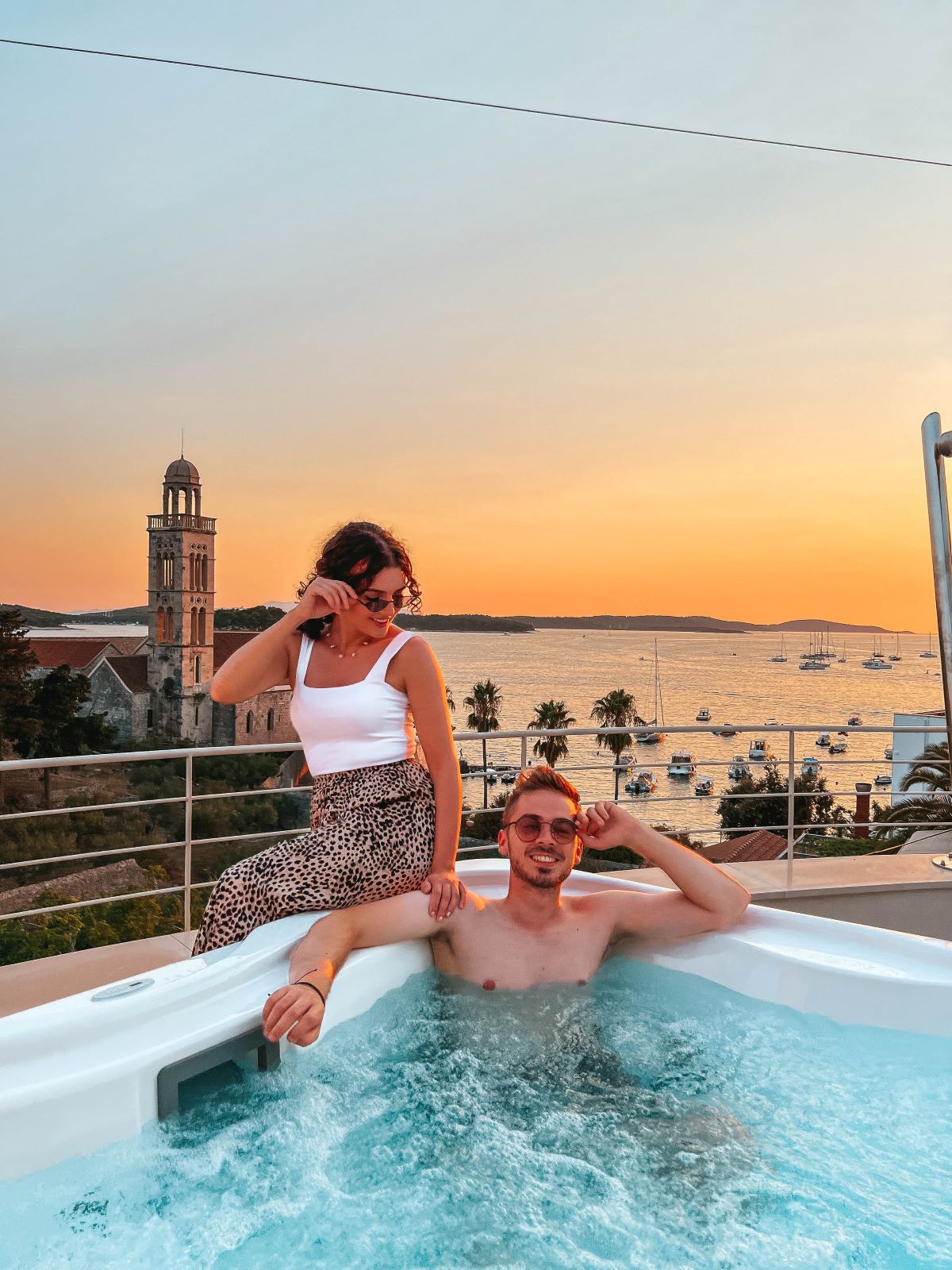 There is also a shaded lounge area next to the Jacuzzi.

The pool can be heated. Our travel bloggers did not need to use this function of the pool, but it could come in handy if you plan to visit this villa out of the main season. 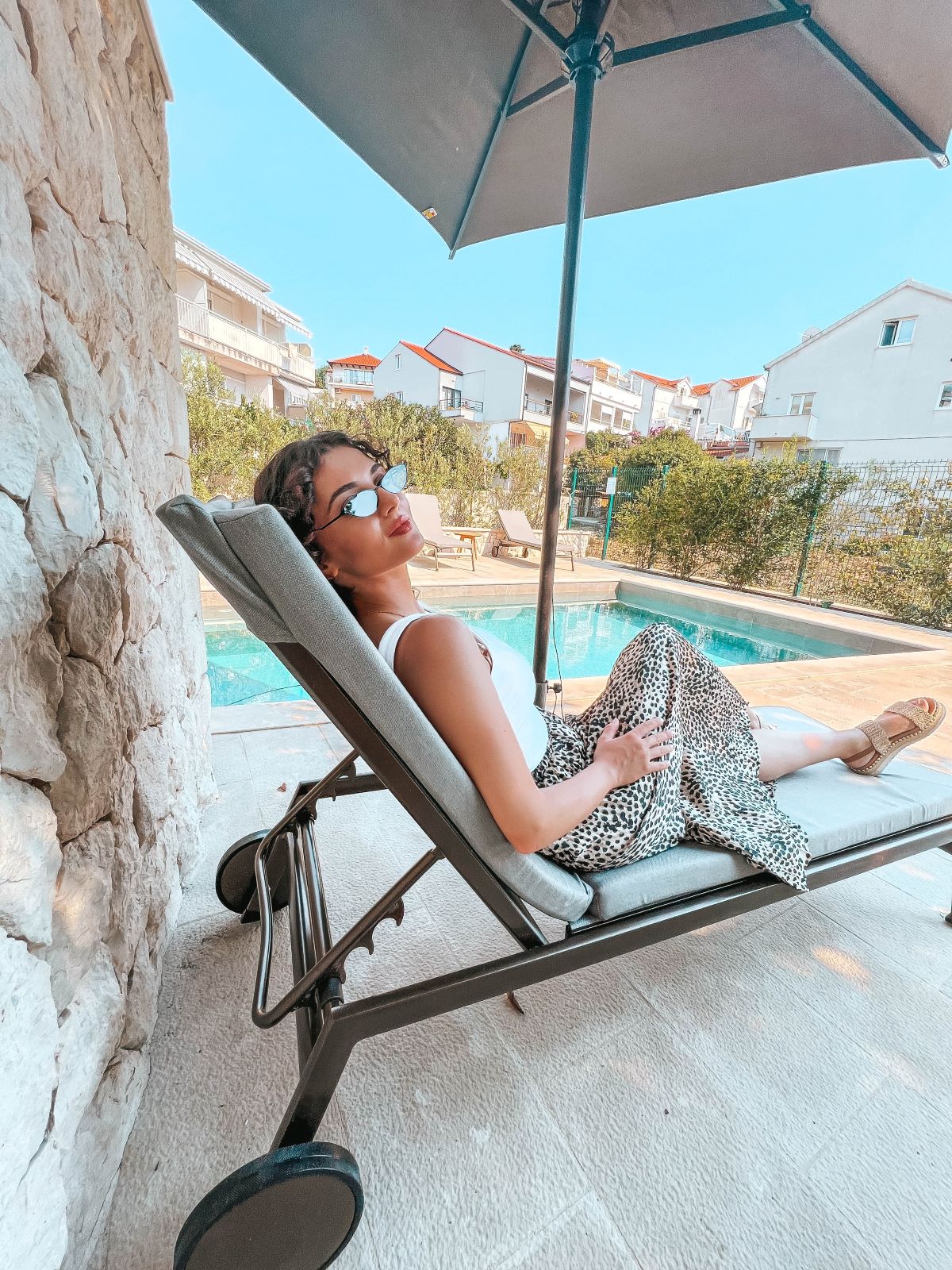 Furthermore, this is a large villa for 12 guests and with 6 bedrooms. It spreads over several floors. It is tastefully decorated and traditional is mixed with the modern.

There is even a gym for exercise in the villa. Our travel blogger used a treadmill. 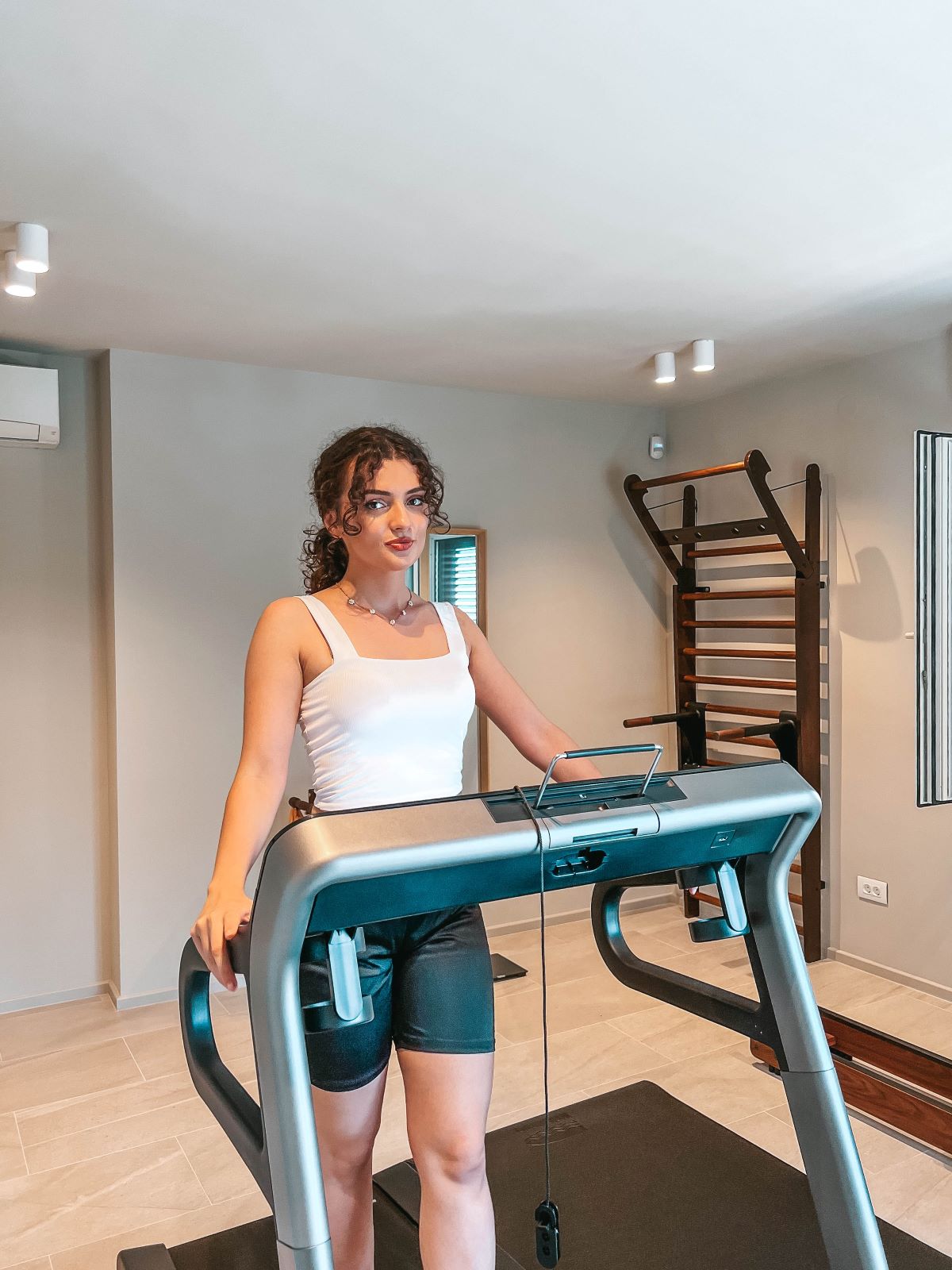 Gym in the Villa Endless Dream

There are many choices for day trips from Hvar. Our travel bloggers chose a day trip to Blue and Green cave and the Vis archipelago.

Both caves are situated on Vis island so it is recommended for you to take a speedboat tour as our travel bloggers did. They booked a tour from Segorent Yachts with an experienced crew and new boats. 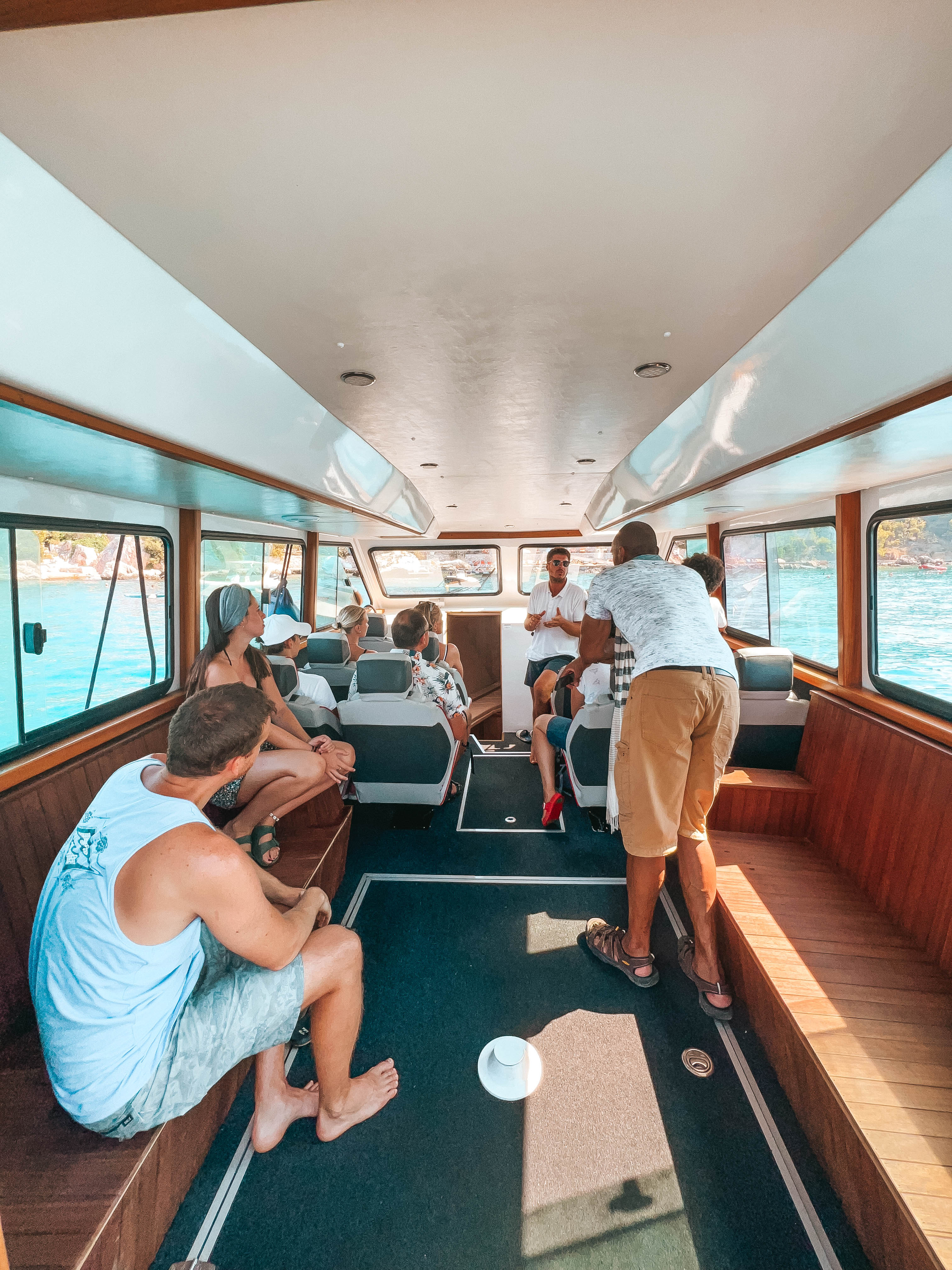 Group tour to Blue and Green Cave by Segorent Yachts

As you can see from the photos it was a group tour, but you can always book a private tour as well because then you can have a tailor-made tour just for you.

On the other hand, if you choose a group tour you will have a chance to meet new people. 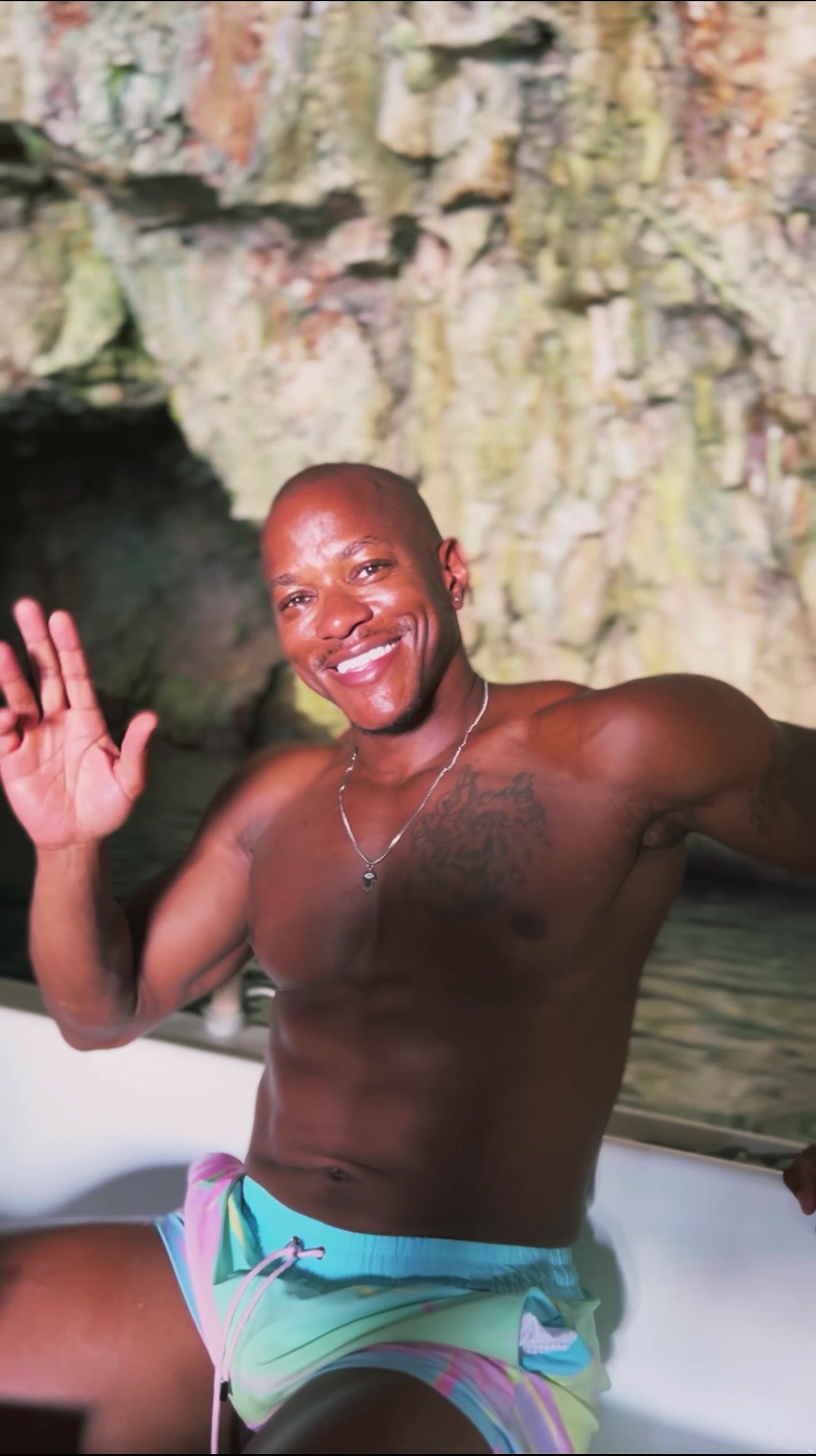 Meeting new people on a day tour from Hvar

Blue Cave is situated on Bisevo, a small island near Vis. The sun enters the cave from the entrance below the water and makes it aquamarine blue. This is how the cave got its name.

Similar to Blue Cave the sun shines from the top and turns the walls of the cave green. There are two entrances to the cave and it is bigger than the Blue Cave. 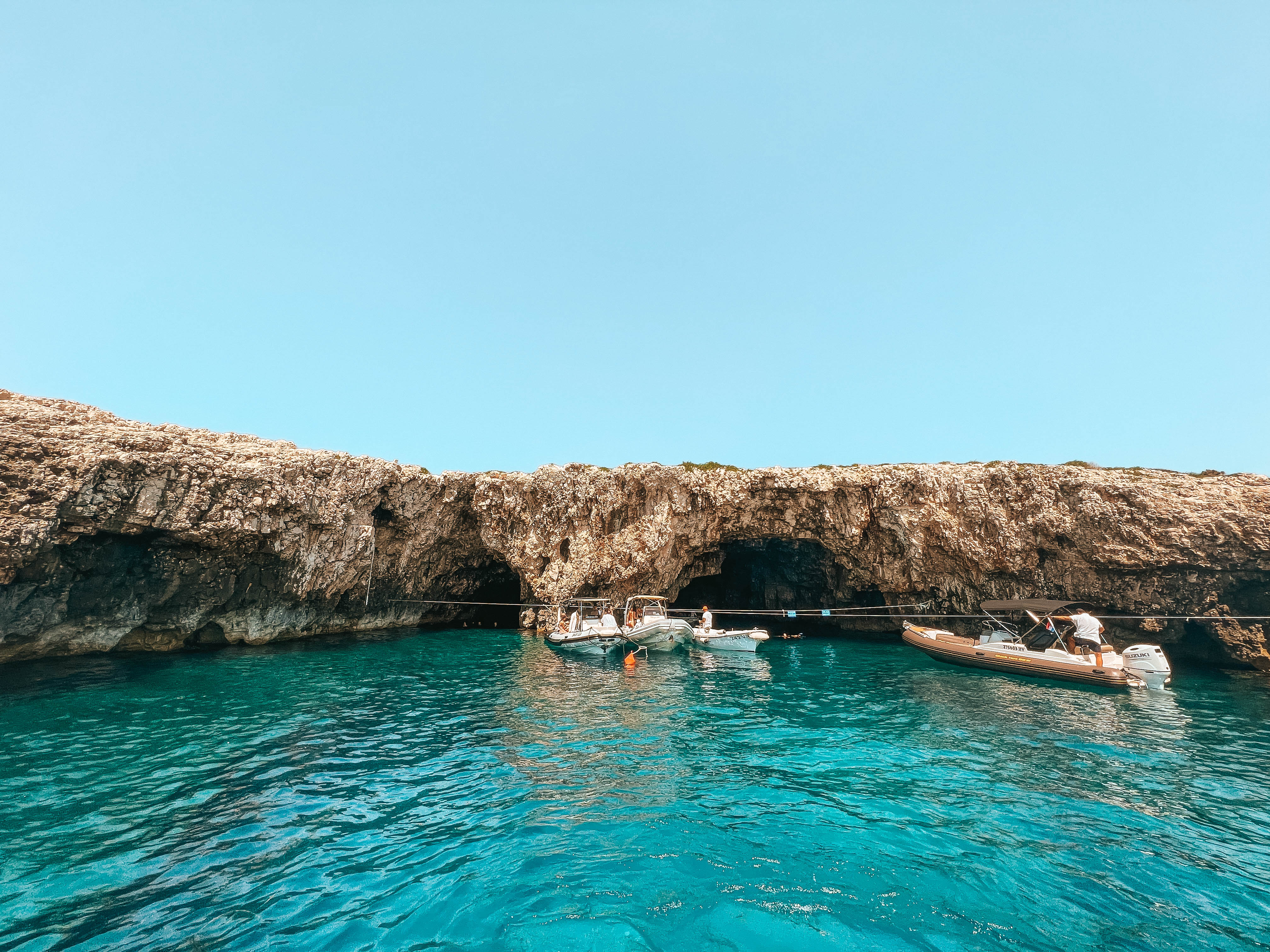 Furthermore, this is a trip with swimming stops on beaches of the Vis archipelago. 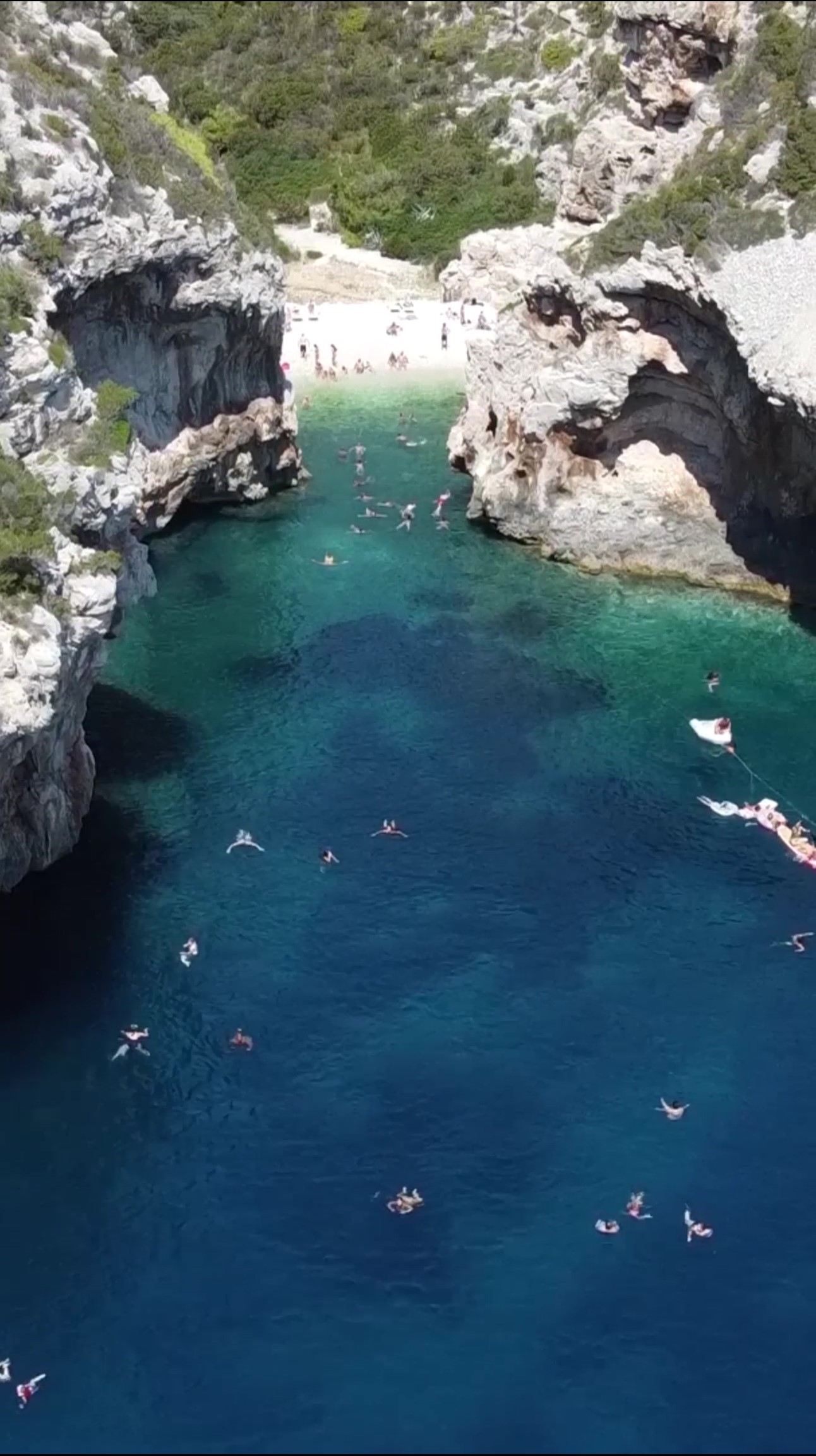 Swimming stop during the tour

As you can see this was really a day trip, but totally worth it!

Did you like our blog about a luxury vacation on Hvar? 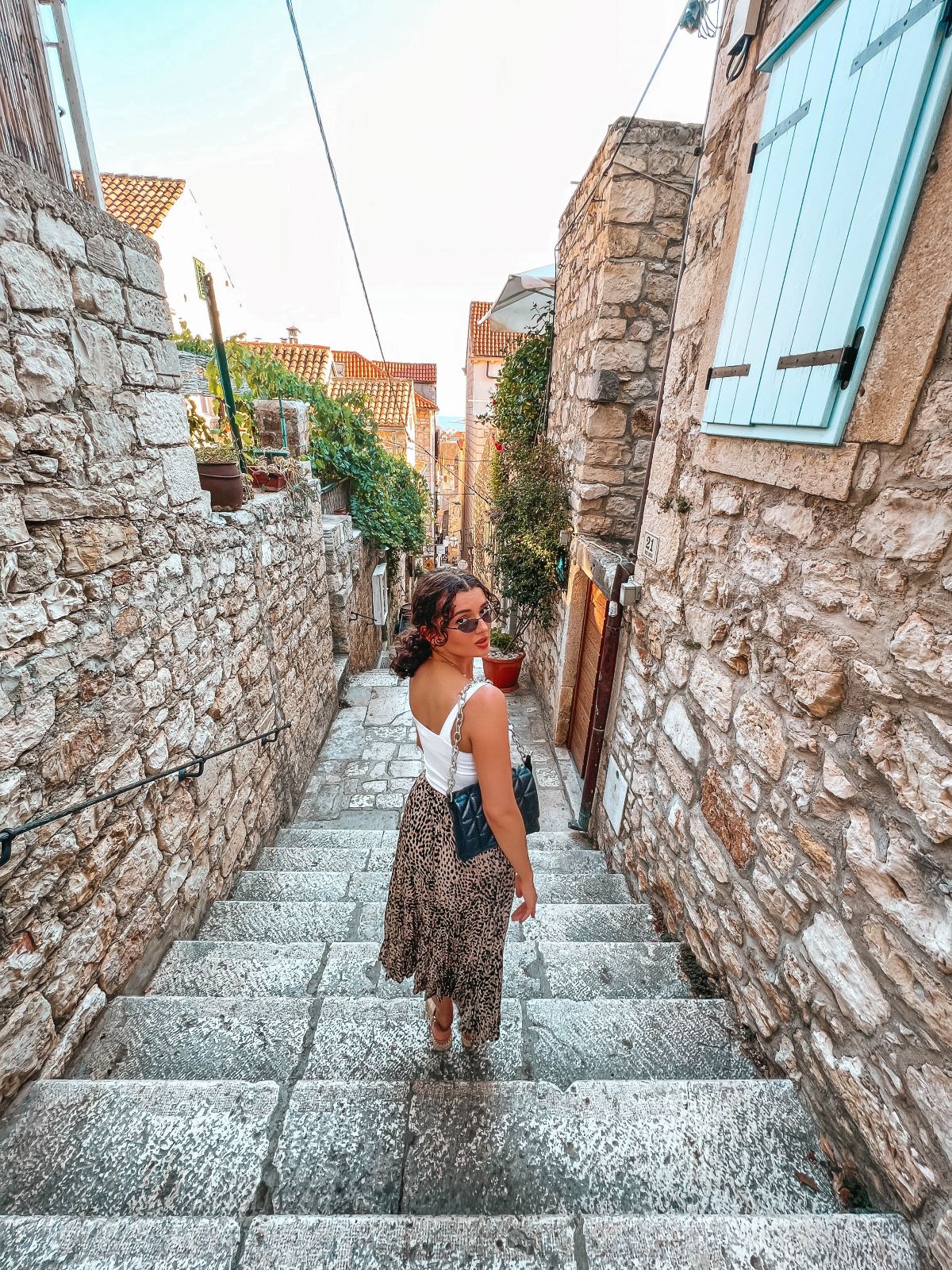 This could be you next, or even this summer. Just send us your inquiry or book online one of our Hvar villas and get lost in Hvar's narrow stone streets. At least till the end of your vacation! 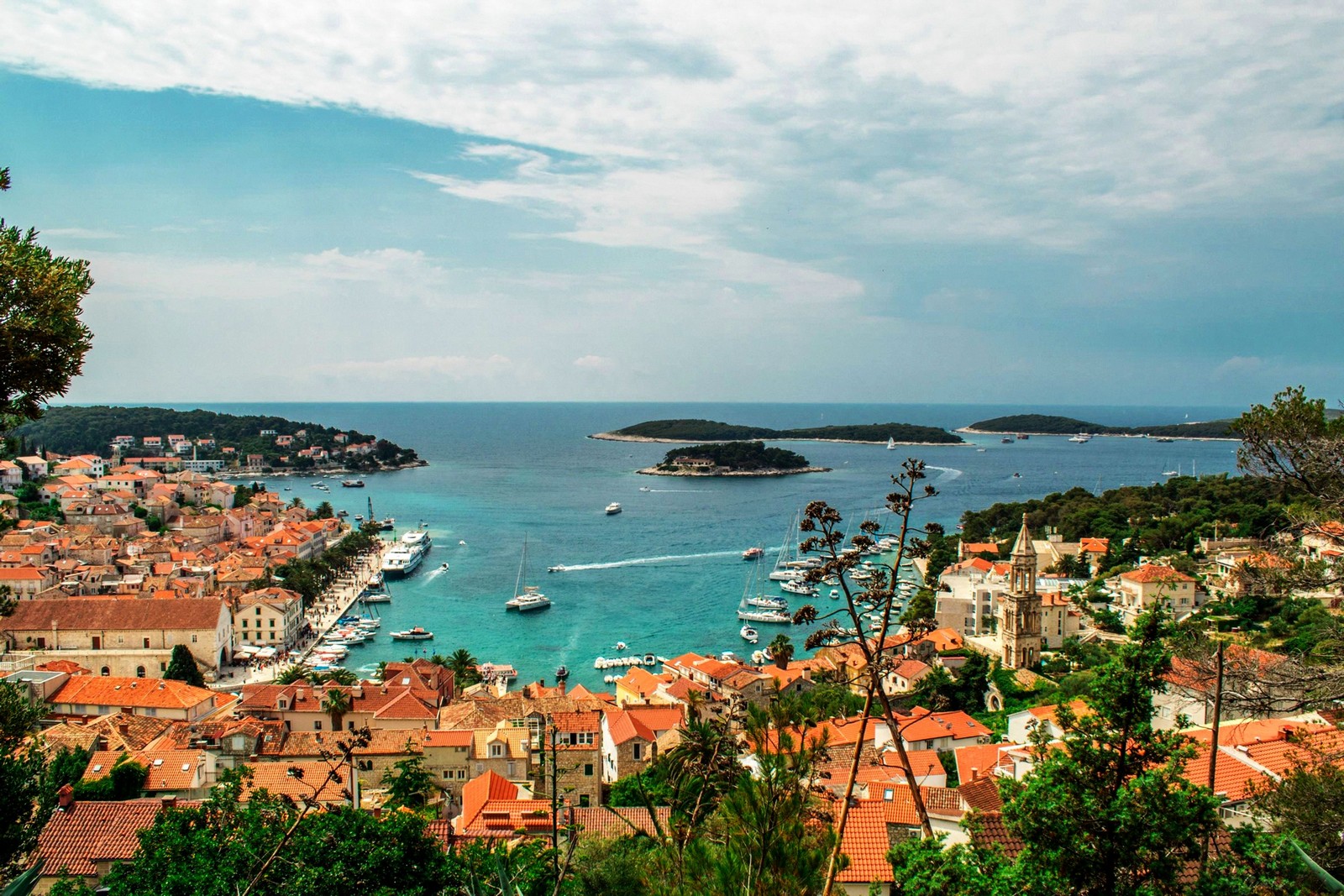 The Hvar Island has become an irreplaceable place for those who are looking for a perfect family holiday or exciting Hvar nightlife with friends. Here you will find answers to questions; Why Hvar and what you can visit there, which Hvar places you have to see, in which clubs you can party all night and which Hvar restaurants to visit. 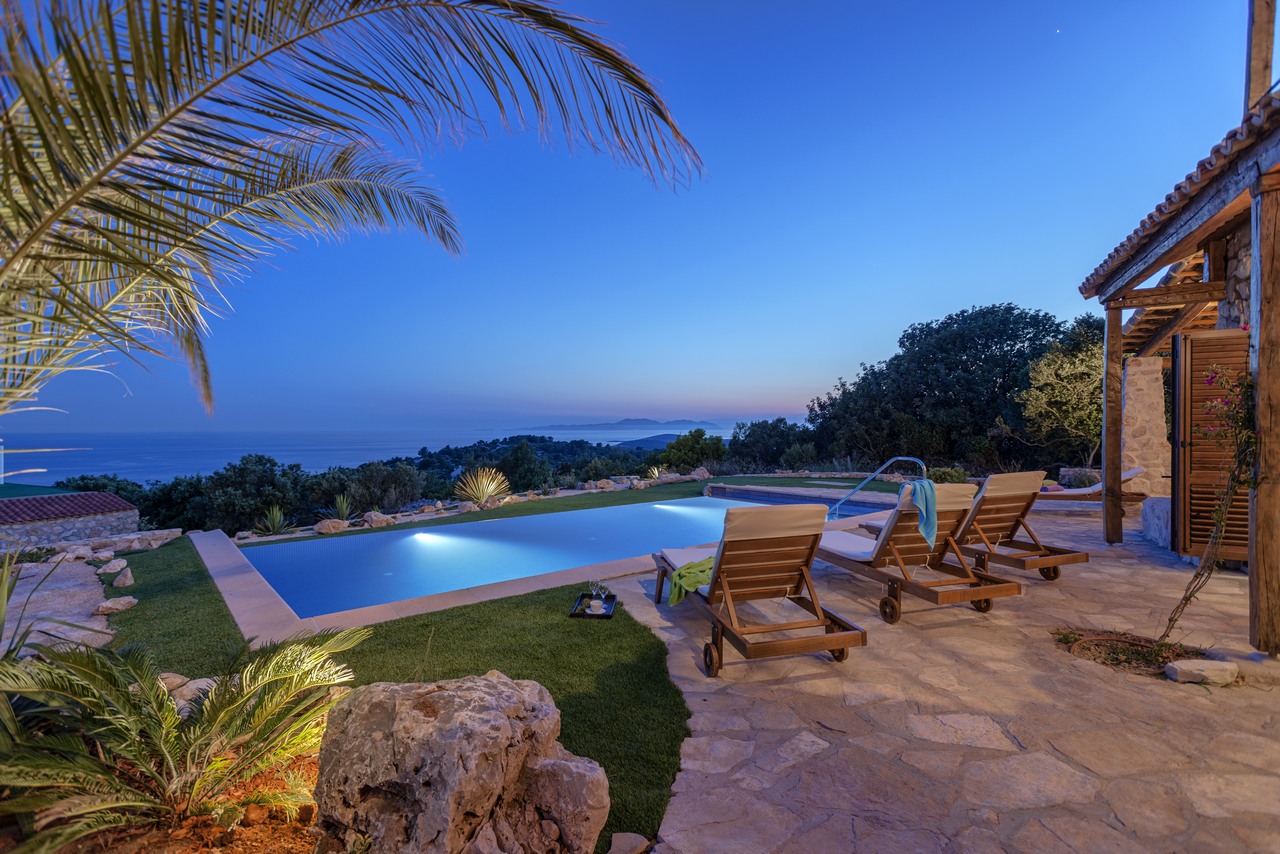 The Best 10 Hvar Luxury Villas for Perfect Holidays in Croatia

Do you want to spend luxurious holidays on the island of Hvar? Take a look at our top selection of the most luxurious villas on Hvar with incredibly luxurious amenities, such as the infinity pool overlooking the sea, a sauna with stunning panoramic views, a private wine cellar, a boat mooring or a tennis court. The best villa rentals on... 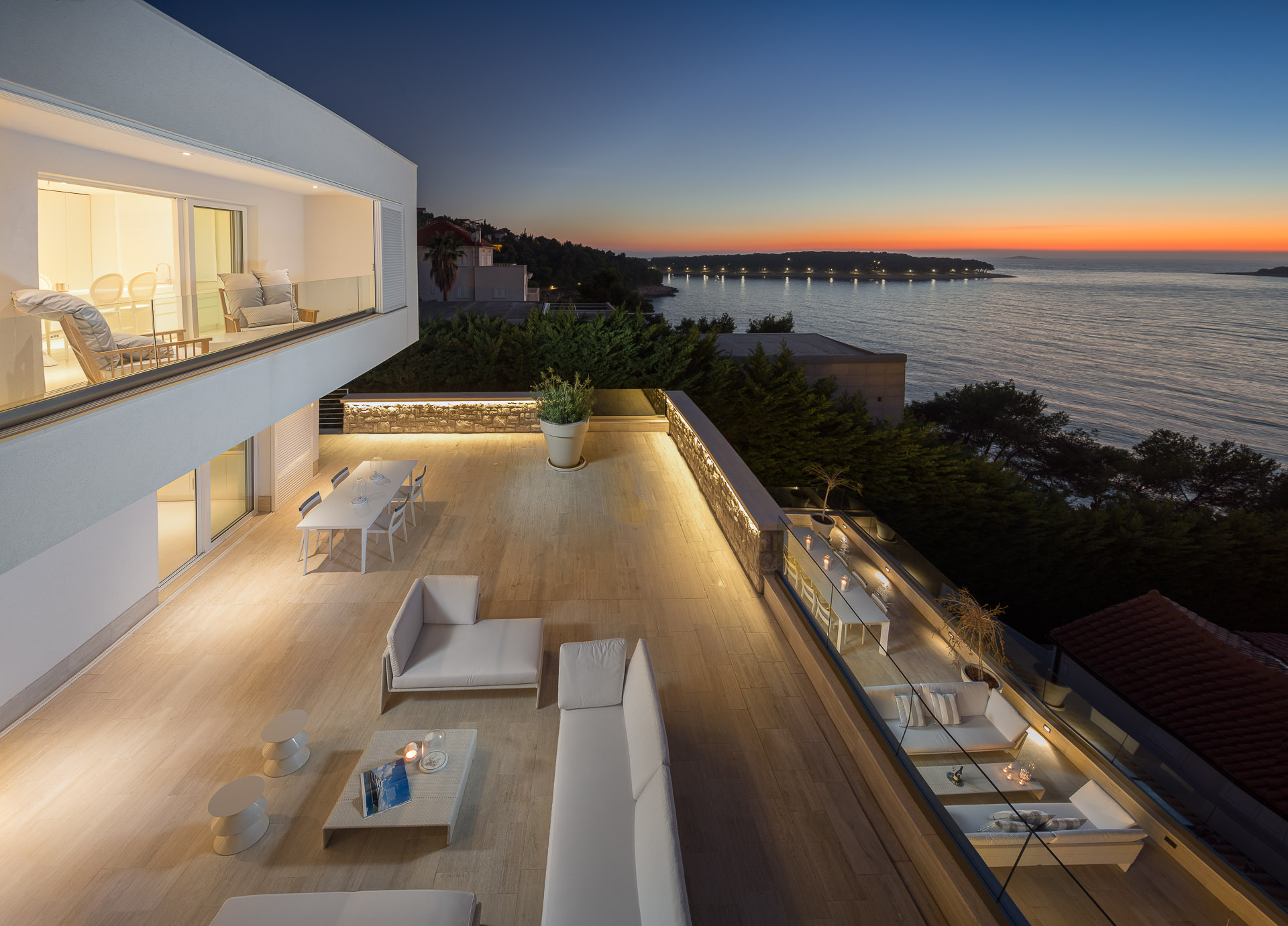 Villas in Croatia for large groups

We have many inquiries for villas in Croatia for large groups or families. This is why we have decided to write this blog post and select luxury villas in Croatia that can accommodate large groups. When we started to select these villas we realized we have a large number of villas that fit this profile. Since we would like to include all... How to get to Hvar island in Croatia

If you are wondering about the options of getting to Hvar island, here is the blog for you. There are several options on how to reach Hvar from the mainland, using the ferry, catamaran, or a private speedboat transfer. In this short travel guide, all the options are explained. Whatever decision you make our concierge department can help y... 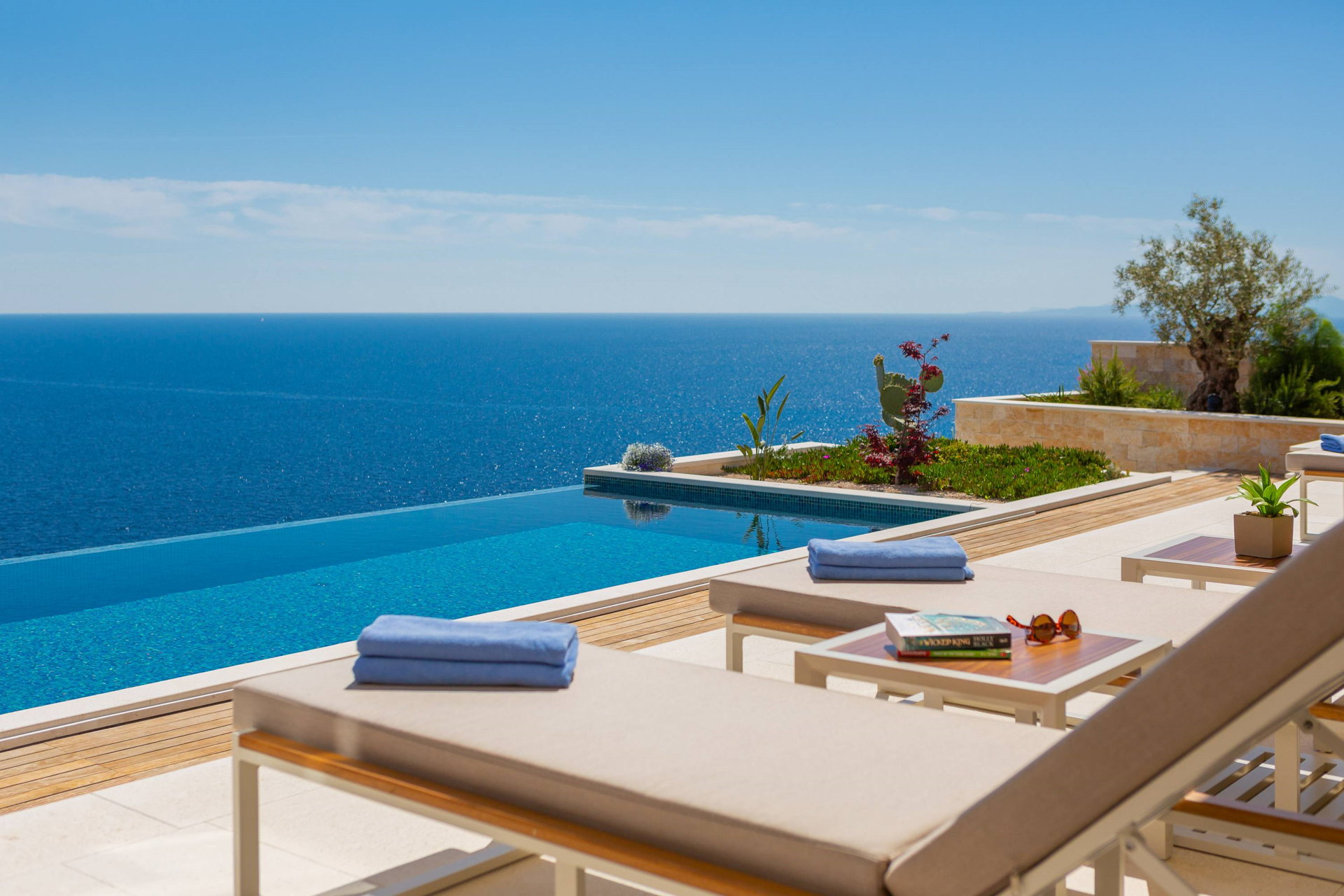 The sun-kissed Dalmatian island of Hvar is the flagship of a luxury vacation in Croatia. Therefore, among the Croatian luxury rentals, in this article, we pay special attention to holiday villas on Hvar.