In the last decade, Dubrovnik has become a must-see place. Tourists from all over the world flock to Dubrovnik and enjoy the historical and cultural heritage without knowing how it all came about. In this blog we will try to bring you closer to the top sightseeing places in Dubrovnik and its origins.

Stradun is the lifeline of old town Dubrovnik and even today, almost 1000 years later, still the heart of social life in Dubrovnik. From everyday life to commemorating public festivals or administrating punishment, Stradun has been an unavoidable part of Dubrovnik and almost every significant site in Dubrovnik is located on Stradun. 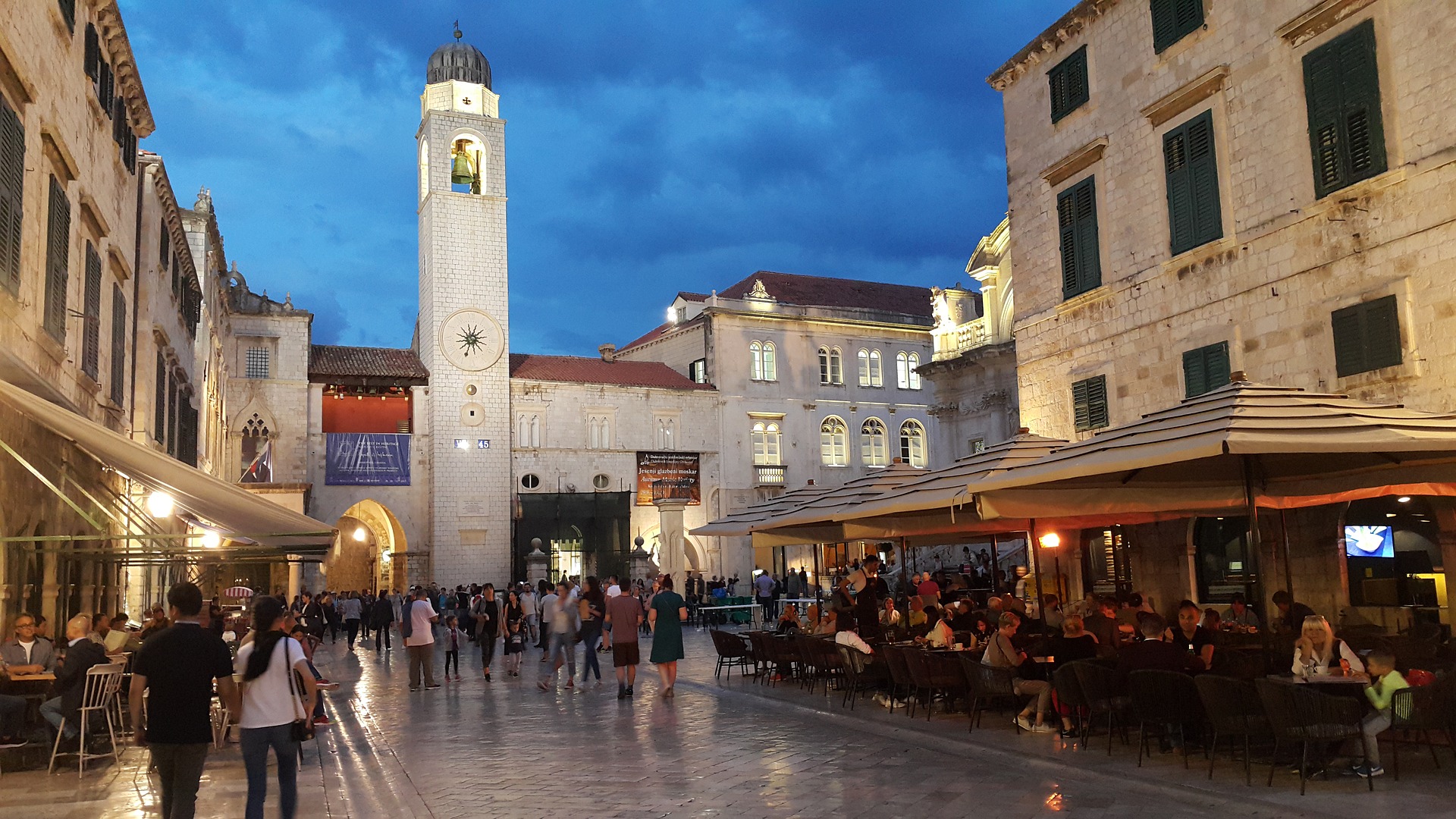 Origin of Dubrovnik and its main street, Stradun, dates back to 7thcentury AD when barbarian tribes, mostly Slavs, destroyed town Epidaurus and its citizen of Roman descend take refuge on a small islet. Opposite to the refugees Slavs founded their settlement. During centuries two settlement developed closer ties and in 11thcentury the narrow sea canal that divided them was filled and that created a street that citizens of Dubrovnik called Placa. The name Stradun was given by Venetians. It literally means “big street” and it was a mocking name for the Dubrovnik main street.

Stretching from east to west Stradun connected the only two entrances into town. The entrances were guarded by two tower gates, Pile Gate on the west and Ploca Gate on the east end of the street. Dubrovnik also has a third gate into town called Buza Gate. It was opened in 1907. when Dubrovnik was under Austro-Hungarian rule.

Some of the Dubrovnik most famous sightseeing location can be found between two entrances in to the town. 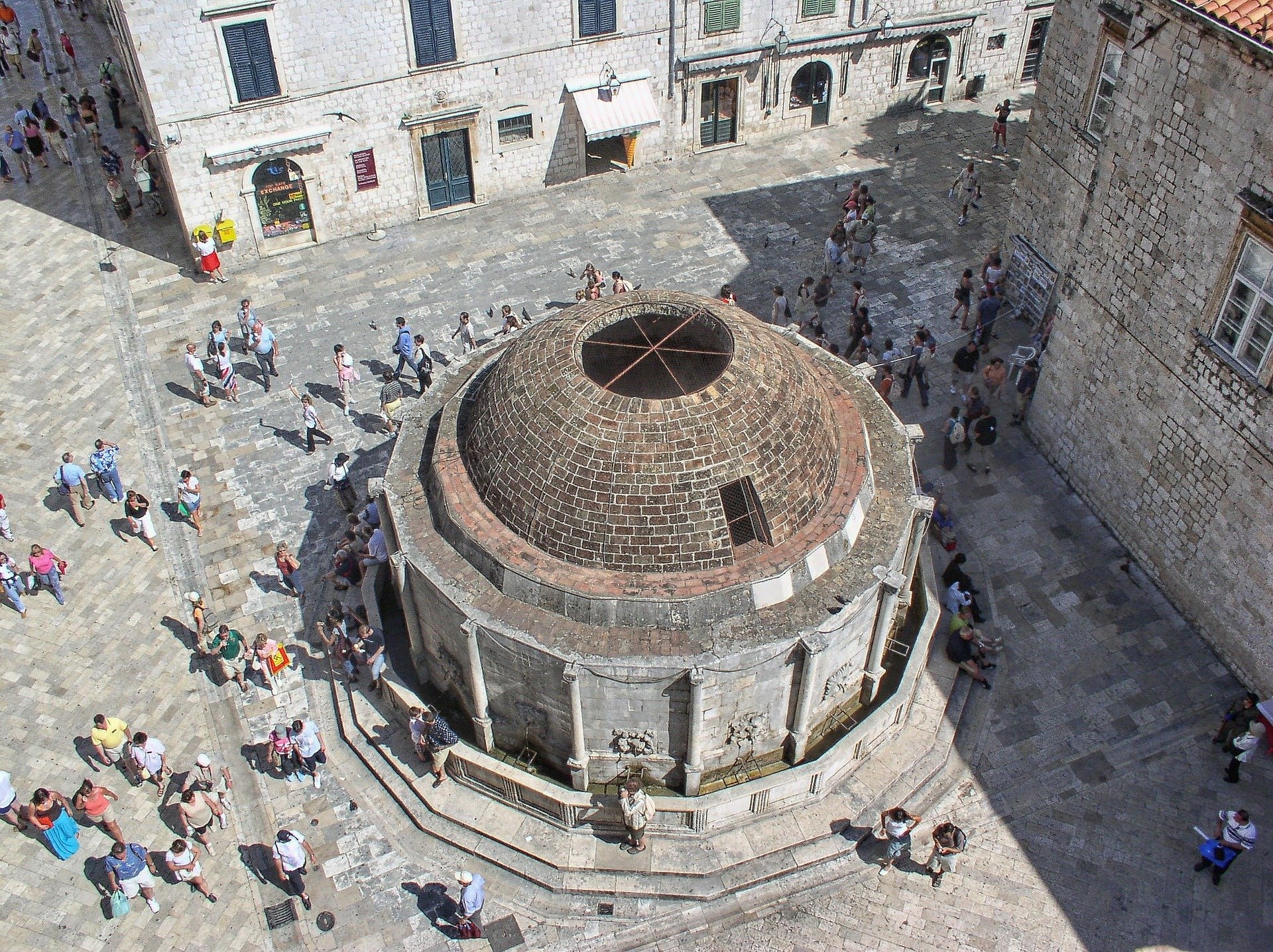 The Great Onofrio's Fountain with its polygonal shape with 16 masquerades that are pouring water is the first thing guests can see when entering Stradun and Old Town from the west. For centuries it was one of the several places where Dubrovnik citizens could get water for their everyday needs.

Located next to the Pile Gate the fountain was made by the Neapolitan builder Onofrio della Cava in 1438., after whom it was named. Onofrio`s Fountains are the part of the Dubrovnik aqueduct that brought water from 12 kilometers away source. A similar aqueduct operation was not known in Europe until then. It received today’s appearance after the great earthquake of 1667. and it was in use until the end of the 19th century. 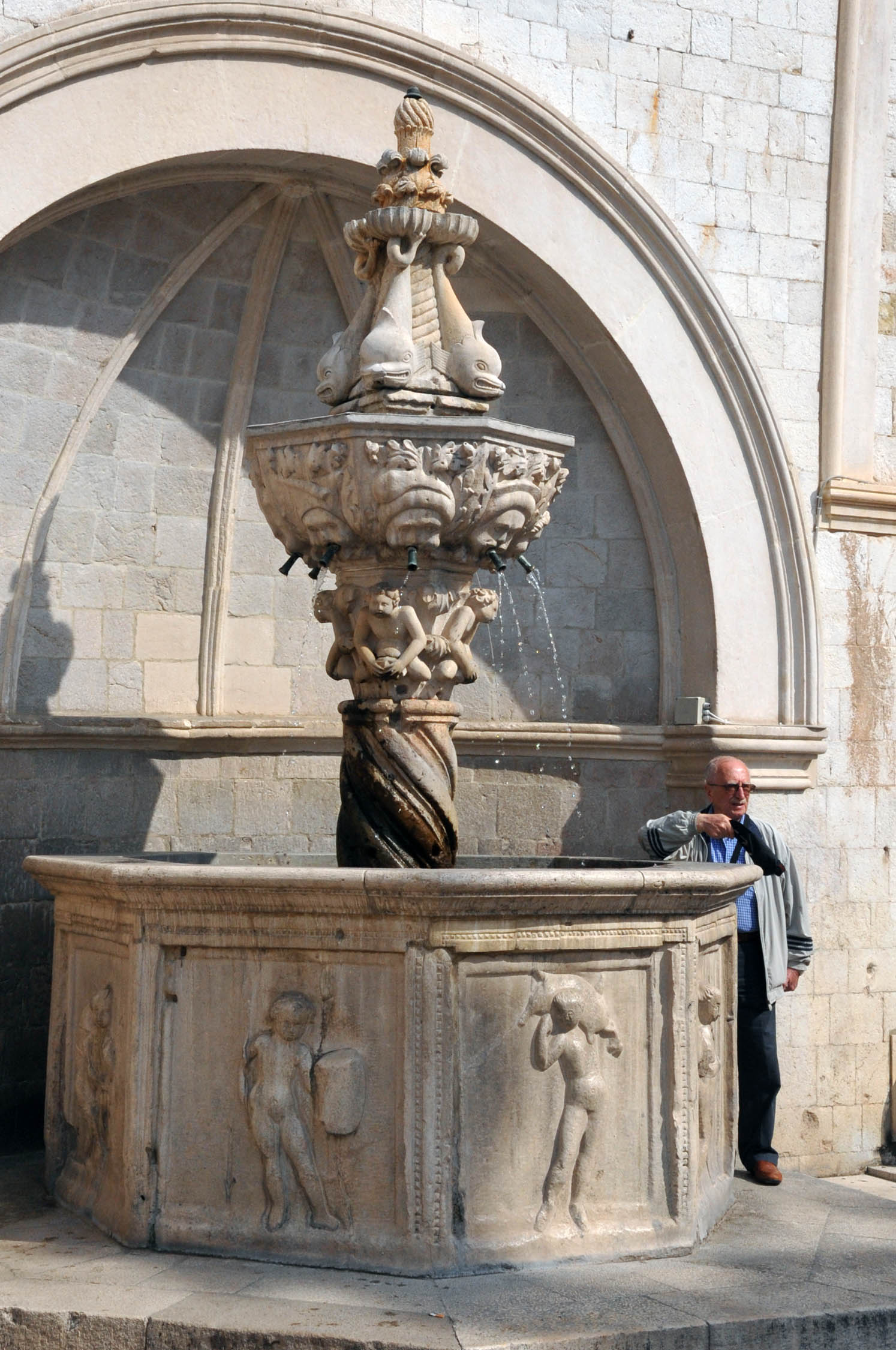 Small Onofrio`s Fountain is located at the eastern end of Stradun. The fountain supplied water to the market on Luza Square in Dubrovnik. Onofrio della Cava also designed this fountain which bears his name and it was erected at the same year as a Bigger Onofrio`s Fountain.

In the Middle Ages, smaller fountain had a religious meaning. It was used only by Christians. In the immediate vicinity was a Jewish fountain, which was used for water supply by the Jews of Dubrovnik. The area next to the Little Onofrio's Fountain is used as the stage area of the Dubrovnik Summer Festival for some plays. 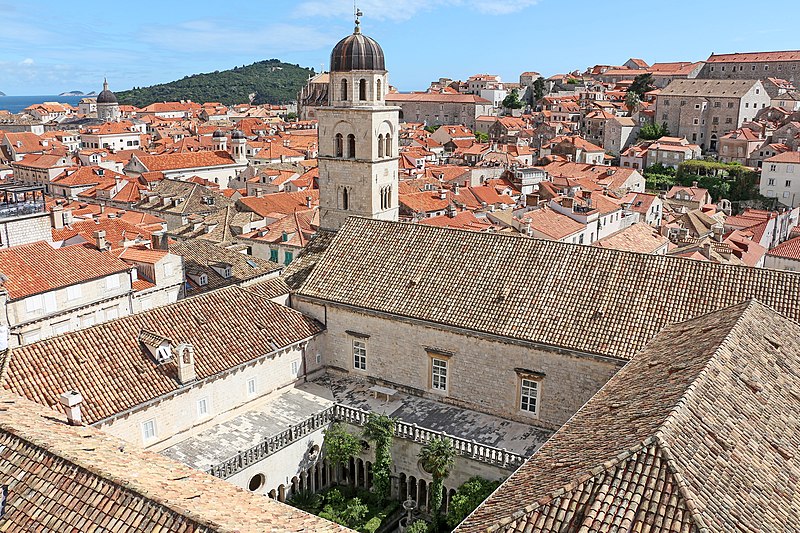 Further down the Stradun you will see The Franciscan Monastery. It is a large complex belonging to the Order of the Friars Minor.

Construction of monastery started in the 13thcentury. Some dates the beginning of construction in the year 1317. Reason for this discrepancy is that some scholar believes that two monasteries was built but as construction of city walls progressed, they relocated monastery inside the city walls. Others believe that only one monastery was constructed and that it is the one from 1317. No matter who is right monastery it self is a beautiful piece of medieval architecture from which, sadly, we have left preserved only beautiful Pieta sculptured in 1498. 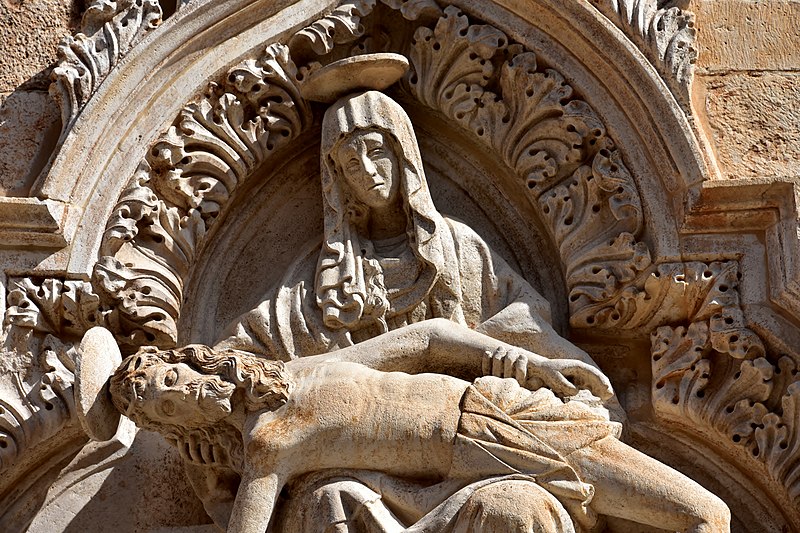 The rest of the monastery was heavily damaged in the big earthquake in 1667. Also, over 7500 rare book editions were destroyed in the earthquake and fire that started after. Thanks to the enormous effort of Franciscan monks most of lost books were restored and today monastery holds over 70 000 books which contains 206 incunabula (books written before invention of printing press). 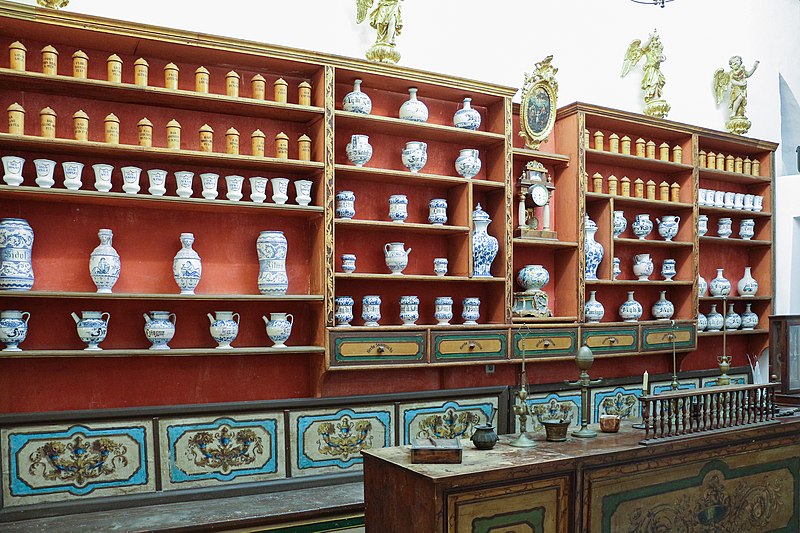 Inside the monastery there is a pharmacy that dates back to 1317. It is the oldest still functioning pharmacy in Europe. There you can buy fragrant creams and rose waters made according to recipes over 200 years old. These authentic souvenirs delight both foreigners and locals alike. Most popular sightseeing location, especially for the younger visitors, is the ledge on the wall of the monastery, the so-called “Drunk Stone”. It’s actually a masquerade, a grotesque mask that looks like an owl. According to legend, a young man who could not find love vowed to try to "beat" the stone until he succeeded. One day he finally succeeded and soon fell in love. 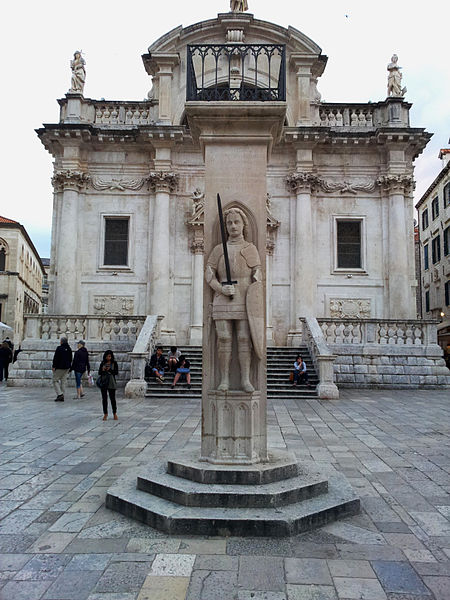 Dubrovnik`s oldest surviving monument is situated on the east end of Stradun. It is one of the most prominent landmarks of Dubrovnik and top sightseeing location.

According to the legend statue of knight Orlando depicts hero Roland (warlord that served under Charlemagne, king of Franks) that helped Dubrovnik in battle with Saracens in the 8thcentury AD. The true origin of the statue is probably connected with the visit of Sigismund of Luxembourg, Holy Roman emperor and also a king of Hungary and Croatia, after the battle at Nicopolis in 1396.

These kinds of monuments were very popular in German cities during 14thcentury. The statue of knight with sword symbolized the independence, stability and justice of the town authorities. Stone pillar with the figure of Orlando holding a raised sword was erected in 1418. and it is the only one that still exist outside Germany. It was sculpted by gothic sculptor Bonino da Milano and placed on the Dubrovnik main square.

The measure of length, the Dubrovnik elbow, was measured according to the length of the knight's forearm, which is 51.2 cm. On the pole above the statue the flag flattered stating the independence of Republic of Dubrovnik.

Today, raising the Libertas flag on to the pole announces the beginning of Dubrovnik Summer Festival and for Dubrovnik it is still a strong symbol of independence and freedom. 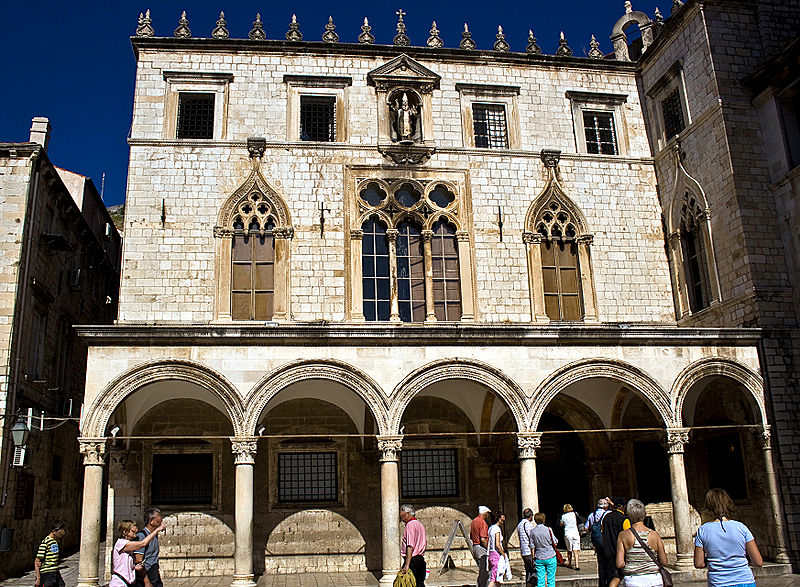 Sponza or Divona Palace is a Gothic-Renaissance palace in Dubrovnik. The name Sponza originates from Latin word “spongia” meaning “place where water is collected”. It is one of the most beautiful and luxurious palaces in the city of Dubrovnik. It was built between 1516. to 1522. and with its splendor and beauty testifies to the wealth and culture of the people of Dubrovnik at the time.

Over the centuries Sponza Palce had served a variety of public functions. It served as custom office, mint, armory, treasury, bank and even school. The palace's atrium served as a trading center and business meeting place. An inscription on an arch testifies to this public function: "Our weights do not permit cheating. When I measure goods, God measures with me."

At the end of the 16th century, it became the cultural center of the Republic of Dubrovnik.

It survived the 1667. earthquake without any damage. Today it houses an archive with materials on the history of Republic of Dubrovnik. 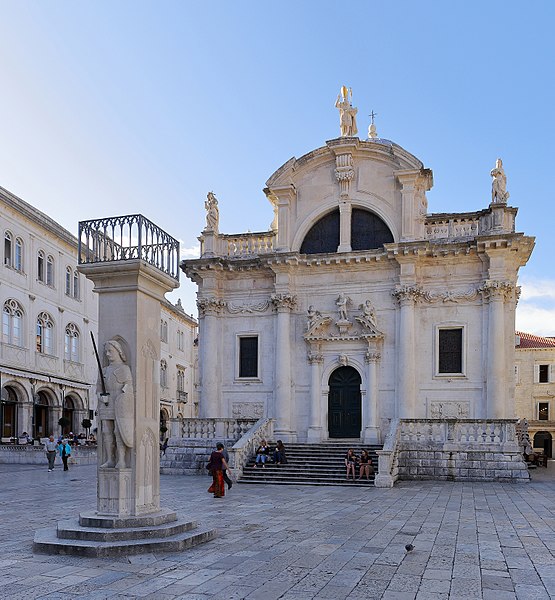 St. Blaise is the patron saint of Republic of Dubrovnik. He was a Bishop of Sebaste, modern day Turkey. There, in 316., he died a martyr's death in the persecutions of the Roman emperor Licinius, becoming one of the innumerable heroes of the first centuries of Christianity.

According to the legend Venetians, jealous on success and wealth of Dubrovnik, seek to destroy it. In 972. they anchored outside the city port with an excuse that they need provisions before going further towards Levant. St. Blaise appeared in front of the parish priest Stojko while he was praying and reveal him the true intend of the Venetian.

In the name of St. Blaise laws were passed, coins with image of a saint were minted, ships sailed under his flag, envoys were sent to foreign lands, his statues watched over the walls on every traveler and newcomer. The importance of St. Blaise to people of Republic of Dubrovnik can be best seen on a stone inscription on the eastern entrance to town: “Stay away you barbarians! No one is afraid in this fortress, which is warmed by the breath of the holy old man.”

Grand Council decided to build the church to its patron, St. Blaise, on Platea Communis, in front of the City Hall on February 26, 1348. This Romanesque church survived the earthquake in 1667., but was burned down in a fire in 1706. Immediately after the fire they started to build new baroque church of St. Blaise according to the design of the Venetian builder Marin Gropelli. Statue of St. Blaise survived both the earthquake and fire and it still stands in the church holding in his hand model of the city of Dubrovnik.

The church has a richly decorated facade with a portal, and in front of it are wide stairs. The central space of the church is surmounted by a dome. On the main marble altar is a statue of St. Blaise of gilded silver, the work of Dubrovnik masters from the 15th century. 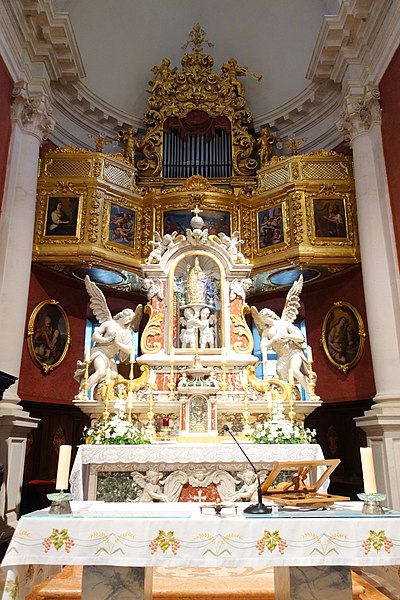 During summer stairs in front of the church are often turn into open air stage where artist performs and it is still one of the most popular places for locals to socialize.

Feast of St. Blaise is celebrated in Dubrovnik on February 3rd with big precessions on Stradun. 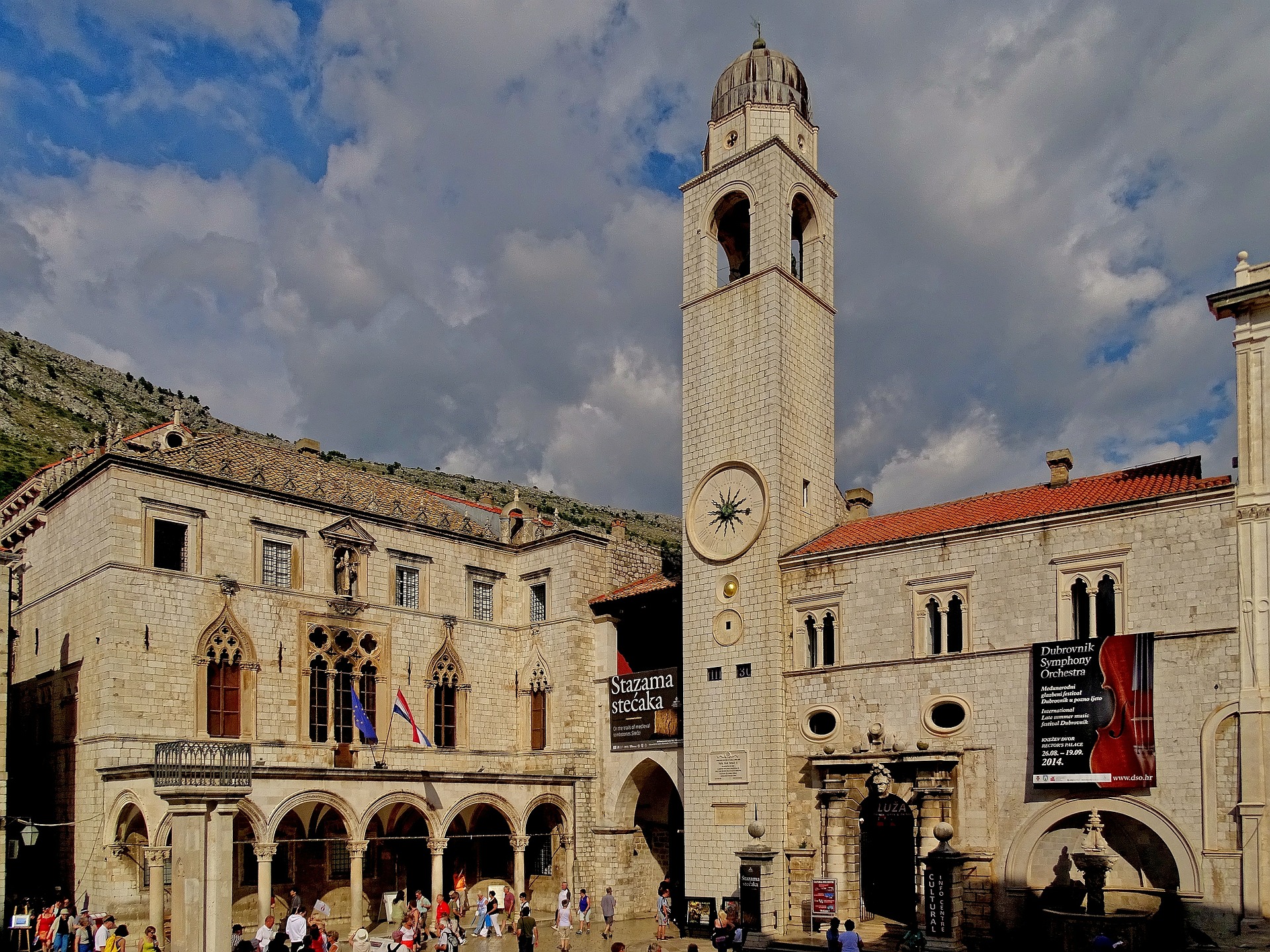 At the east end of Stradun city bell tower is placed. The original bell tower with a clock was built in 1444. The first bell was cast by Mihajlo from Florence while today's large bell, weighing two tons, with a height and diameter of 130 cm was cast by master Ivan Rabljanin in 1506. Tower bell was replaced several times during history. This is the third one. In the Homeland War (1990. – 1995.), the bell tower was destroyed several times, once a grenade pierced it on both sides, so Stradun could be seen through it from a distance. 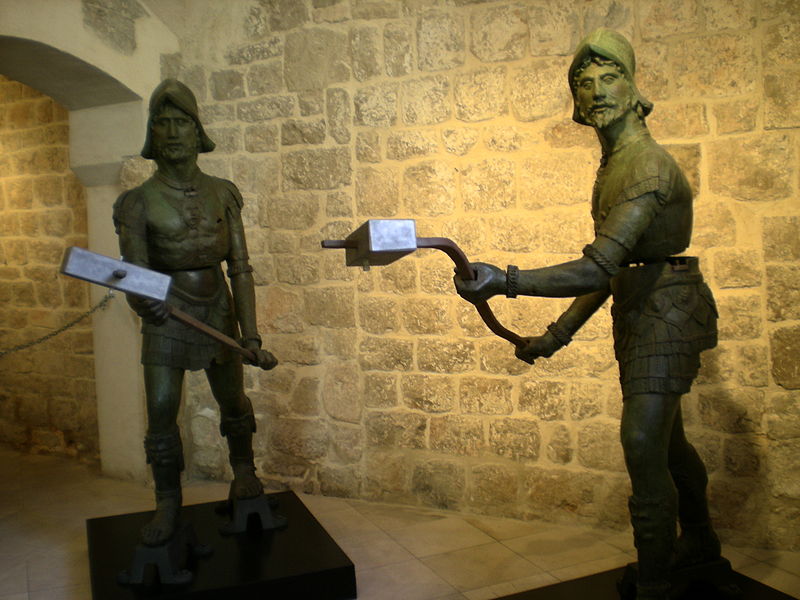 Tower clock was renovated several times during its long life. It received its first renovation in 1478. The same year wooden figures were replaced by copper ones called Maro and Baro, but better known as Zelenci (Greenies). Looking like heroes from ancient Greek these two figures are symbolically defending both the Republic and Dubrovnik.

Clock in the Bell Tower was replaced once more in 1780. and in 1929. during renovation it was replaced with modern one. After the earthquake in 1979, the area under the bell tower, which is today called Luza center, was renovated and now it houses cinema, exhibition and sales space and a theater.

We hope that with this blog we have revealed some exciting facts about Dubrovnik top sightseeing locations and that we have encouraged you to visit this beautiful city. 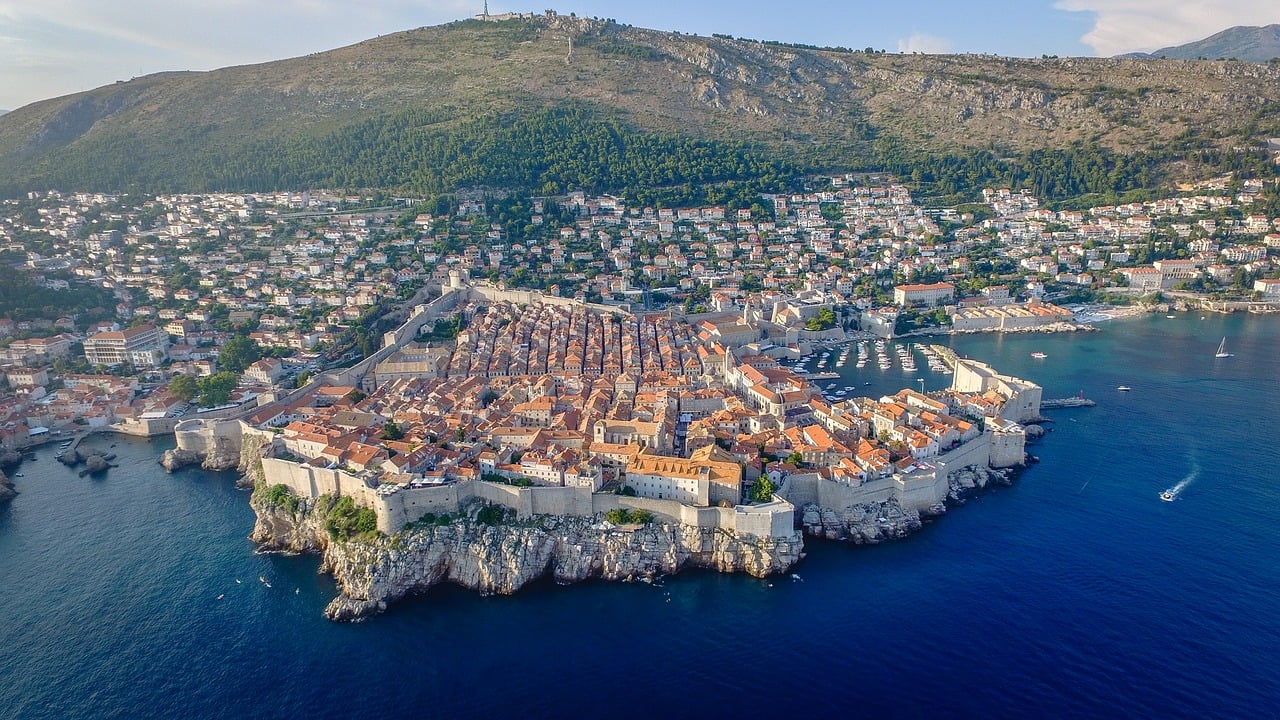